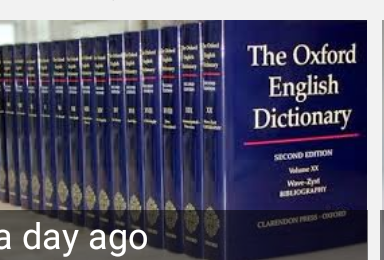 29 Nigerian words and expressions were added in the latest (January 2020) updates of Oxford English Dictionary..

In a blog post, OED said some of the words are borrowed while others are coinages.

Here is a list of the new Nigerian words and senses added to the OED in the latest update:

*chop-chop*, n.2: “Bribery and corruption in public life; misappropriation or embezzlement of funds. Also as a modifier.”

*danfo*, n.: “A yellow minibus that carries passengers for a fare as part of an informal transport system in Lagos, the largest city in Nigeria. Also as a…”

*ember months*, n.: “The final four months of the calendar year (September to December), esp. considered together as a period of heightened or intense activity.”

*flag-off*, n.: “The moment at which a race, esp. a motor race, is flagged off (see flag v.4 additions a); the start of a race. Now chiefly Indian English and…”

*flag*, v.4, Additions: “to flag off. transitive (usually in passive). To direct (a driver) to start a motor race, esp. one in which the competitors start at intervals, by…”

*flag*, v.4, Additions: “to flag off. transitive. Indian English and Nigerian English. In extended use: to start (an event or undertaking).”

*gist*, n.3, Additions: “Nigerian English. Idle chat, gossip. Also: an instance of this, a rumour or piece of gossip.”

*gist*, v.2: “transitive. To reduce (a text, document, etc.) to its essence or gist; to condense, summarize, or précis.”

*guber*, adj.: “Of or relating to a governor or governorship; = gubernatorial adj.”

*Kannywood*, n.: “The Nigerian Hausa-language film industry, based in Kano; Kano regarded as the centre of this industry. Cf. Nollywood n.”

*K-leg*, n.: “In singular and plural. A condition in which one or both of a person’s knees are turned inwards, resulting in a noticeable gap between the feet when…”

*mama put*, n.: “A street vendor, typically a woman, selling cooked food at low prices from a handcart or stall. Also: a street stall or roadside restaurant run by…”

*non-indigene*, adj. and n.: “Not native. In later use chiefly West African: belonging to an ethnic group considered not to be indigenous to a particular area.”

*okada*, n.: “In Nigeria: a motorcycle which passengers can use as a taxi service.”

*to rub minds in rub*, v.1: “to rub minds (together): (of two or more people) to consider a matter jointly; to consult and work together; to confer. Similarly to rub our (also…”

*sef*, adv.: “Used for emphasis after a statement or rhetorical question, often expressing irritation or impatience.”

*send-forth*, n.: “A celebration or event to mark a person’s departure; a send-off. Frequently as a modifier, as send-forth ceremony, send-forth party, etc.”

*zone*, v.
zoning, n., Additions: “Nigerian English. The system or practice of allocating nominations for certain political offices to candidates from particular regions, as part of an…”

Who could be next?