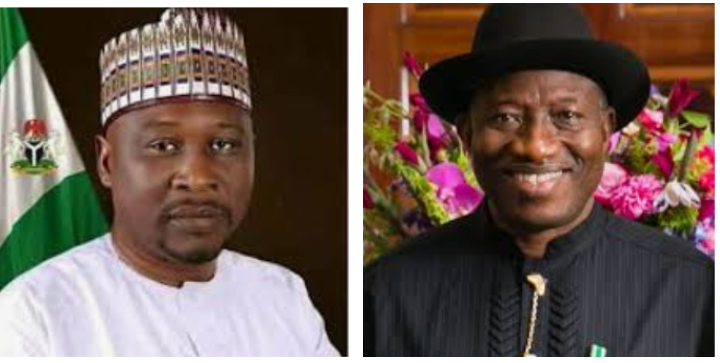 Adamawa state Governor,  Rt . Hon. Ahmadu Umaru Fintiri has congratulated former President Goodluck Jonathan on his 63rd birthday anniversary, describing him as “An epitome of humility that is celebrated in Nigeria’s political history as icon of democracy”.

In a press release Friday, signed by the press secretary to the governor, Mr. Humwashi Wonosikou, Fintiri said the Former President Jonathan would be remembered for his exemplary character and sacrifice for sustainable democracy in Nigeria.

Fintiri has described Jonathan as a rare son of Africa a true nationalist which is reflected where he once declared that “My ambition is not worth the blood of any Nigerian” in a divine address that made Africa a reference point.

“Your commitment to Nigerian nationhood remains outstanding and commendable. Today, Africa celebrates your sacrifice for nation and democracy”. Fintiri said.

The #FreshAir Governor said former President Goodluck Jonathan’s commitment to peace has seen him working as ECOWAS peace envoy to Mali. “You are a person of great integrity and deep dignity and extraordinary courage. Your courage has helped in no small measure in deepening democracy on the continent”.

While commending Jonathan’s God fearing posture amid sit tight African leaders, the Governor praised his decision to allow democracy thrive. “I’m glad to add my comments to the many who wish you happy birthday. Thank you for setting examples of working in good faith in finding common ground”.

He prayed for long life, good health and strength for former President Goodluck Jonathan to do more for the continent.

“Your love for Nigeria and commitment to her unity, stability and good governance is worthy of emulation by all.