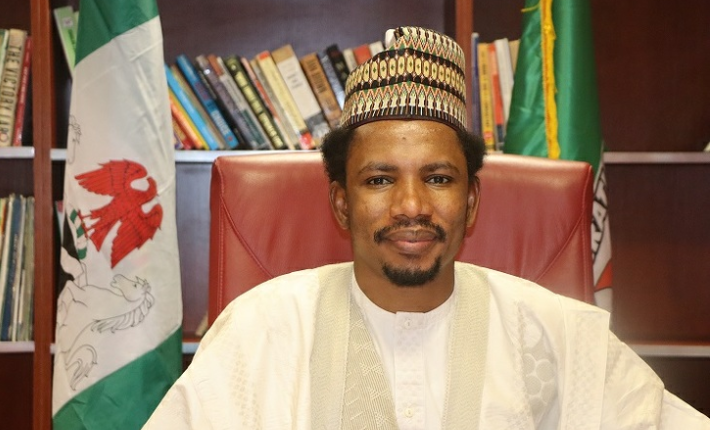 Senator Ishaku Elisha Abbo, known as Cliff, PDP elected, the recently defected to APC, representing Adamawa senatorial district has disarmed a Dane gun wielding punk, who threatened to kill him should he failed to pay two million naira before crossing the mounted roadblock intended against him.

The punk has at about 2am on Friday, 13th November 2020, according to the eyewitness account, led dozens of tauts to mount a roadblock purposefully against the Senator who was on his way to his cousin’s wedding in Mubi local government, northern senatorial district of Adamawa state, northeast Nigeria.

Eyewitness account has it that the seeming amateur attack was purposefully launched on the life of the Senator rather than the money being demanded.

The punk was said to be handed to the relevant authorities for further investigation.

Abbo lamented that thugs and hoodlums were necessitated by unemployment and lack of sound social welfare to cushion down youth restiveness as most of the youths were graduates from tertiary institutions of learning, searching in vain for employment.

Abbo has attributed criminality to unaddressed poverty on the side of the youths who ought to have been engaged but are denied functional education by means of skills acquisition training and other kinds of empowerment.

“Most of the youths are pushed into this, wasting their talents by doing something bad at the detriment of the selves and the society at large,” Abbo said.

Abbo has revealed his plan to empower the youths in his constituency to be self-reliant, arguing that entrepreneurship would cushion down youth restiveness such that the targets in question would not be dragged into social vices for a miserable amount.

“That young man was not deliberate to have attempted attacking me with his Dane gun, idleness and poverty are eating deep into the fabric mental being of the youth in our society, it is harshly biting hard on them and I must try my best to take them out of that mess.

“Come this Saturday I will go back to my constituency to have a self-sustained empowerment programme of millions of naira to help them regain their poverty freedom,” Abbo said.

However the youths who were unsympathetic to, considered Abbo’s narrativisation as the “farce of our time”, “a fallacy beyond rationale,” arguing that the eyewitness account was but a crude rehearsals lacking cohesion with the Abbo’s account.

“The eyewitness account revealed that the Senator was targeted for kill. However, Abbo himself has exonerated the seeming cinematic poverty driven antagonist from the allegation that he was after his target’s life.

“Where were the Senator’s security attaché and members of entourage to have allowed him exposed to the activities of tauts, to have by himself disarmed a man wielding Dane gun demanding N2 million at the roadblock that he with colleagues mounted? The story does not add up, could not go for Kannywood or Nollywood and Mubi doesn’t have a cinematic-wood to have considered accommodating the storyline.

“It’s either another Cliff’s deceitful covered predator against the prey act or simply a stage managed by Abbo acting Rambo intended to attract sympathetic attention,” the youths in the opposition would argue.

Abbo, has however shelved the insinuation as lacking merit. He was however impressed with the narrative that celebrated the incident against him, with the expression of delight that those in the opposition have added a plus to his popularity.

Those having the “syndrome” of peddling false information, need to be “vaccinated” like Corona virus patients decries fake news, gives recipes – Turner