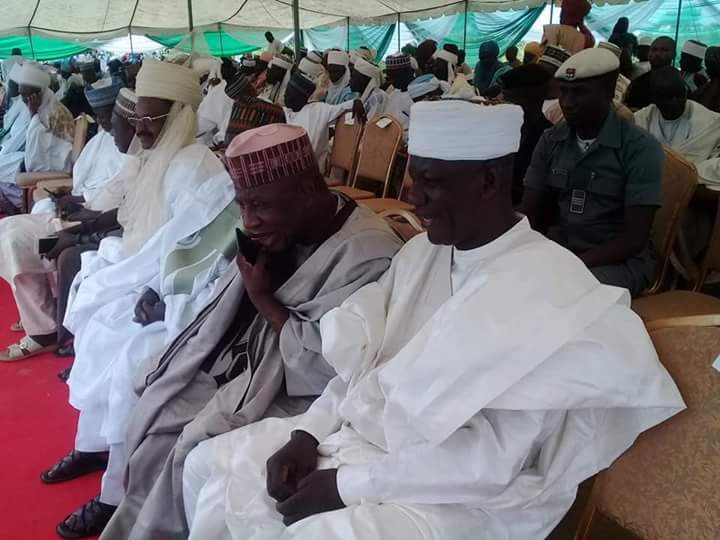 The radical “no to Bindow” slogan was first advocated Friday, at Jalingo-Maiha district of Maiha local government area of Adamawa state, Nigeria when the governor appointed but the appointment squashed by competent court of law district head, in romance with the contempt of court, having been restrained from, went ahead to arrogantly parade himself as the district head.

The imposter having recruited illiterate youths in villages around Jalingo-Maiha district as thugs, as ardent converts of his doctrine of anarchy for insecurity, to translate in violent terms, the theology of hate speech he openly evangelised.

The imposter attempted to replace the chief Imam of Jalingo-Maiha central mosque who was known for over four decades to be teaching, preaching and practicing peace, with one who could take violence, disintegration and anarchy joined together, as doctrine to proselytise.

The imposter was reported to be claiming the backing of the state governor.

Some youths were heard exclaiming “Allahu Akbar!” and chanting in fulfulde, as the lingua franca of the area, that Idi the imposter should never be a king and that his sponsor would never make it in 2019

“We say no to Bindow,” some other youths would say “they have their way, we’ll have our say in 2019 with our PVC.” Bindow was however from the southern senatorial zone of Adamawa state. He was said to have hailed from Maiha local government area but based in Mubi.

The likes of road networks built by Bindow in Mubi, was summarily said to be lacking in Maiha.

This informed the debate on the legitimacy of the story that “Bindow hails from Maiha.” That’s for the northern senatorial zone.

The youth in the southern senatorial zone of Adamawa state have equally joined the popular call Saturday, at Mayo-Belwa, during the flag off of the Mayo-Belwa, Jada, Ganye roads “No to Bindow.” “Nigeria sai Buhari” “Adamawa sai Nyako”

The Sahara reporters capturing the mood of the moment would report that: There was mild drama in Adamawa as youth openly rejected the re-election bid of Jibrilla Bindow, Governor of Adamawa State.

The drama almost disrupted an event held to flag-off a road project in the state, as a large crowd of supporters of the former governor, Murtala Nyako, booed the incumbent governor, Jibrilla Bindow, an indication that all may not be well for the governor’s intention to contest for a second term.

It all started when Senator Abubakar Mohammed Mo-Allayidi urged the crowd to vote for the All Progressives Congress (APC), a statement, which was greeted with grumblings and murmuring from the youth, who burst into loud shouts of “No! No! We don’t want Bindow”.

It would seem Boss Mustapha, Secretary to the Government of the Federation (SGF), whose poor attempt to gauge the people’s mood, agitated them, as Mustapha had requested the crowd to respond to his chanting of “Nigeria, Sai Buhari; Adamawa, Sai Bindow”. The youth, however, refused and shouted: “Adamawa Sai Nyako”, instead.

That’s for the southern senatorial zone.

The central senatorial zone was reported to be the central nervous system of politics in Adamawa state.

Already, it was said, governor Bindow has been having it tough with an uncompromising Black Cup movement led by Mustapha Atiku Ribadu young and agile whom from a distance, would not seem could kill a fly but however spits political venom rather constructively, challenging the road projects in Adamawa state as being impoverished of the requirements associated with due process,

The Black Cup pressure group was reported not to have seen any worthy in governor Bindow’s reelection bid with the unpaid salary arrears, gratuity and other entitlements for some months in spite of the bailout funds, the Paris Club refund fund and other allocations shared to the statea, withthe inefficient and ineffective education, especially at the primary schools level and dysfunctional healthcare, especially at the secondary level.

Similarly, the Newshawk would report that a chieftain of the All Progressive Congress (APC) and former senator representing Adamawa central Sen. Abubakar Girei has advised the National Secretariat of the party to stick to the direct primaries in Adamawa if the party hopes to win the state again in 2019.

Sen. Abubakar stated that the greatest mistake the party would make is to allow the primaries to be decided by delegates, adding that the process will give the governor advantage to pick the ticket.

Mustapha, at the event, also accused former Vice President Atiku Abubakar of neglecting his community while in power for eight years.

Mustapha took a swipe at the former Vice-President, describing him as a “failed politician”.

He stated this during the flag-off of the N22 billion road project, leading through Atiku’s home town, Jada, in Adamawa State.

He also urged communities in the area to be wary of politicians, whom he said “have failed to respect the people’s mandate in the past”.

Mustapha said: “This road was last rehabilitated in 1996, when President Muhammadu Buhari was Chairman of PTF and the road has remained dilapidated and abandoned for the past 22 years, until his intervention again.”

Mustapha Baba Shehuri, Minister of State for Power, Works and Housing, who also spoke at the event, said: “The 112 kilometre Mayo Belwa-Jada-Ganye-Toungo Route A.8 traverses Jada town and terminates at Toungo. It serves as a vital link between Taraba State and the Republic of Cameroon, as well as the Mambilla Hydro Power Plant.”

This is not a turbaning ceremony but the flag-off of the reconstruction of Mayo-Belwa-Jada-Ganye-Toungo Road in Adamawa State today. The Federal Executive Council had on 13th June, 2018, approved the award of the contract to Triacta Nigeria Ltd for the sum of N22.7 billion with a completion period of thirty six months.

Present at the event were Gov. Bindow Jibrilla, a representative of the Lamido of Adamawa, SGF Boss Mustapha, Ministers of State I and II in the Power, Works and Housing Ministry, the Gangwari Ganye, Alh Umar Adamu Sanda, Sen. Ahmed Abubakar Mo Allah-Yidi, Hon. AbdulRazak Namdas, and others.

Strangers to Adamawa may not know the significance of this event, so let me tell them. This road was in terrible shape by the early 1990s. PTF began reconstruction but work stopped after OBJ scrapped PTF for being a “government within a government”. Nineteen years later – 16 under PDP rule – the road became among the worst in Nigeria.

Which Nigerians come from that place or call it home? Former VP Atiku Abubakar and one of his SSAs, PDP National Chairman Bamanga Tukur, and GEJ’s Principal Personal Secretary Hassan Tukur, among others. Their party ruled for 16 years but none could champion the repair of the road to his hometown.

Ironically, one now wants to be president and two want to be governors of Adamawa State. What a small world we live in. If you held high office but could not pave the way to your own home, why should I trust you to govern me well? Yes, you claim APC and PDP are the same. But how come APC is doing in three years what you didn’t do for your own sake in 16 years?