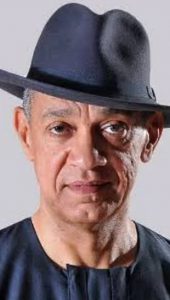 AUN Founder’s Day event has been changed to a political moment with Senator Ben Murray Bruce urging Nigerians to reject APC for PDP. The Newshawk’s SAMA DQQGASOYE was there, he filled in this report.

Sen. Ben Murray Bruce has tasked Nigerians to vote out the ruling All Progressives Congress, APC by voting for the Presidential candidate of the PDP in the 2019 elections, in order to realise a new Nigeria of their dreams.

In a keynote addresse he delivered during American University of Nigeria (AUN) founders day, Bruce charged Nigerians to maintain an abiding faith in the nation, noting that possibilities abound in the land if the right leadership was enthroned.

“We are a nation divided; we are a nation now living with hunger; we are scared of walking around because of insecurity. When we see a Policeman, herdsman, militant, petty thief, area boy, the first thing we do is to hands up and say don’t shoot.

He tasked students to believe in their dreams, saying regardless of the number of times they fail to achieve their goals, they should not be disillusioned.

Delivering his remarks, founding father of AUN and former Vice President of Nigeria, Atiku Abubakar the Waziri Adamawa said his candidacy was an opportunity to bring about a Nigeria of “our collective dream” and aspiration.

The former Vice President charged Nigerians to believe in the possibilities of their dreams, noting that a new Nigeria was only an arm’s length away.

“With all sense of modesty, We have contributed our own quota to the development of our nation and mankind, ” Atiku said stressing the place of consistency in keeping to the ideals of goal setting.

“You may miss your target like it happened to me several times but always remember to get back. Don’t think there are obstacles that cannot be surmounted. Remain on track and continue to have dreams and ambitions,” he told the audience.

Present at the well attended event were the governors of Gombe, Taraba and Bayelsa states- Ibrahim Dankwambo, Darius Ishaku and Seriake Dickson respectively.