*The Periscope Global Must Investigate About N3b Extra Loan – Critic 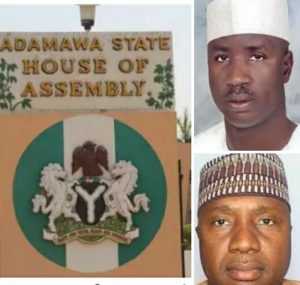 One needs not buy it. Unlike some stories, investigative in nature, the information would have to be put to bargain; the informants playing the Chase’ “An Ear to the Ground”.

This could be called a grand rather classified rumour, one would hear from those authors close to those in authority, leaving the task of authentication whether or not “authenti-fiction” to those whose vocation relates to that or squash it in wait for a definite time to define.

It was said that what amounted to what Hon. Tsamdu the impeached deputy speaker, would interpret as coup in the house, owing to “his unabashed support to governor Bindow, was beyond the mere explanation.

A legislature to remain loyal to and supportive of the executive! Where lies the checks and balances system?

It was made public that the Adamawa lawmakers have approved the request of governor Bindow to secure a loan of N5b for payments of salary arrears of civil servants.

It was however not made public about what would have necessitated, if it is true, the kangaroo kind of approval of extra N3b going by the information hereunder:

“The Periscope Global and other radical media, must investigate about N3b extra loan said to have been advanced by governor Bindow, having been secretly endorsed by just the key legislators,” a critic would argue.

Recall that the Speaker, Adamawa House of Assembly, Hon. Kabiru Mijinyawa is currently in Saudi Arabia for a lesser hajj. He however, in a telephone conversation, revealed that:

Reports are agreed that the Adamawa Speaker did not make further explanation, advancing any reason for the impeachment.

However, the tree-shade-parliaments in Yola, outside the House of Assembly, would tell and retell a story generated out of what could currently be understood as rumour.

One of the under the tree-shade-parliaments deliberated over a story that governor Bindow was said to have used part of the N5b loan meant for offsetting salary arrears to lure the aggrieved party members who previously parted way with him, for a reunion ahead of 2019 election.

Therefore, the balance would be insufficient to offset outstanding salaries of civil servants without securing additional loan.

The story explained that to table any matter relating to additional loan before the lawmakers, would be a market of impossibility for fear of being defined as a mark of financial indiscipline and irresponsibility.

The safe heaven of possibility was for the governor to enter into negotiation with the key among the legislators to have the approval endorsed without passing through the general house.

The key legislators were said to have eventually approved for the extra loan of N3b, which was said to have been sourced from UBA the Friday before.

It was said to be the sole reason why governor Bindow could not make it to Jumua’t prayer.

The story further stated that other members later got wind of the deal by a clique of key legislators among them, which could question the credibility of the house, should it eventually made public. The other members who were in the majority, resolved to impeach the key legislators for usurping the perception of all in taking a rather arbitrary decision deliberately, without consent or deliberation.”

The story has it that the speaker would not be spared. “He would, on Monday, be impeached even while away in Saudi Arabia.

“Hon. Lunsumbani Dili the new deputy speaker would preside over the proceedings in his acting capacity as the speaker to favour the aggrieved group for the impeachment,” The narrator would articulate.

While the story remained unpalatable to the appetite of some tree-shade-parliaments sympathetic to the system and have wished it away as mere rumour, arguing that Monday would be a public holiday to mourn over the death of former President Shehu Shagari and the next day being New Year, hence there would not be any session while on public holiday, other tree-shade-parliaments would argue that only time would tell.

neither the spokesmen to governor Bindow or the chief executive himself was met on this matter before going to press.

The Legislators with Adamawa State House of Assembly would not also make comment for the window not being yet available.