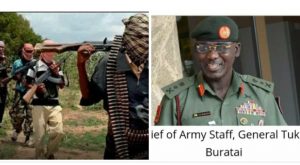 * It is about four days to the gubernatorial supplementary elections, the political parties, particularly PDP and APC and the gubernatorial candidates Rt. Hon. Umaru Ahmadu Fintiri and governor Muhammadu Umaru Jibrilla Bindow, will definitely need 4,016 votes from Michika for one to win and the other to loose – Political pundit

Analysts argued on whether or not the Michika attack by the Boko Haram terrorists would affect the rerun election.

Supplementary gubernatorial elections is slated for Saturday in 46 polling units in Adamawa state among which are 5 polling units in Michika local government area with the total population of 4,016 registered voters as follows:

Michika was visited, Monday, by heavy armed Boko Haram terrorists for a violent attack that was repelled by the Nigerian military.

However, the terrified by the previous experiences, with the occupation of the northern senatorial zone of Adamawa, which Michika is part of, fled the town with families not to be trapped or be subjected to abduction for shield.

Colonel Sagir Musa the Ag Director Public Relations having confirmed the attack, has however called for calm that the military was in control of Michika and the villages around having repelled the BH onslaught.

“At about 7.20 pm, gallant troops of 115 Task Force Battalion deployed at Lassa in Borno State received a distress call from vigilantes at Maikadiri village on movement of suspected BHTs along Road Maikadiri – Shuwari enroute Michika.

“The troops immediately organized blocking positions and swooped on the terrorists which led to exchange of fire. The terrorists attempted to escape but were intercepted and suppressed with heavy volume of fire.

“Consequently, the gallant troops with reinforcement from 143 Battalion Gulak engaged the terrorists on Two Front Coordinated Attacks. The BHTs were completely routed by the troops, neutralizing many of them while others fled in disarray due to superior firepower.

“As a result, they hastily evacuated most of their corpses under the cover of darkness. The entire area has been dominated by own troops and the situation is completely under control. Items captured from the terrorists include One Ford vehicle, two Toyota Starlet vehicles loaded with foodstuffs, one motorcycle and one tyre inflating machine. Further exploitation is to be conducted this morning. Calm has since returned to the city and inhabitants of the town are hereby enjoined to report the presence of strange faces in their localities and go about their normal businesses.

“You are Kindly requested to disseminate this information to the general public through your various medium. Thank you for your cooperation,” Sagir said.

It is about four days to the gubernatorial supplementary elections, the political parties, particularly PDP and APC and the gubernatorial candidates Rt. Hon. Umaru Ahmadu Fintiri and governor Muhammadu Umaru Jibrilla Bindow will definitely need 4,016 votes from Michika for one to win and the other to loose.

It is necessary for the duo to join Colonel Sagir’s call, allaying the fears of the electorates in the area with a view not to be disenfranchised.