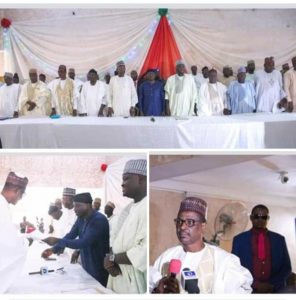 Adamawa governor elect, Ahmadu Umaru Fintiri ATM has commenced moves to probe the administration of governor Muhammadu Umaru Jibrilla Bindow whom the electorates sent out of the window by the electorates for not a new dangled or fictitious but new Fintiri led government as the new ATM constituted a 65 man committee with the mandate to unravel the actions of the administration in the last four years.

The committee, which was being headed by a retired Federal Permanent Secretary, Defence, Alhaji Aliyu Samaila Numan.

Speaking at the Inauguration, Fintiri tasked the committee to ascertain the financial status of the state by outlining the assets and liabilities of the state.

Fintiri urged the committee to clearly determine all the contracts awarded by the Bindow led administration, their current status, amounts paid and outstanding liabilities on each of the contracts.

Fintiri said that his administration would be paying special attention to the development of local government councils so as to fastrack development and asked the committee to ascertain what has accrued to the finances of the third tier of government in the state.

He directed the committee to submit its report before may 29th swearing in ceremony so as to guide the administration.

Responding, the chairman of the committee, Alhaji Aliyu Samaila Numan, pledged to work assiduously to turn out a workable blueprint for the administration.

Assuring the Governor elect that the outcome of the committee would be devoid of witchunt or blackmail.