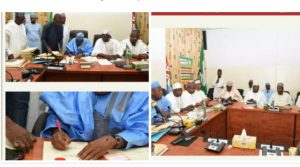 “When the electorates could not kick corruption out of a government house using their votes, the Emirate defined as traditional authority that supports a failed agitation against executive financial indiscipline, suffers humiliation.

“There is a price for war against corruption either positive or negative as much as there is a price for siding with accounting officer to disorder the legitimacy of a house order,” A man of wisdom referred by his supporters as Waliyyi in Kano would reveal to the Periscope Global reporter in Kano about two weeks ago.

It would appear that all was not well even from the initial stage between the Kano state governor Ganduge and HRH Sanusi Lamido Sanusi the Emir of Kano, hence the Kano Emirate would have to suffer humiliation for being subjected, by the constitution, to the dictates of state governor and the legislatures whose leadership could only demand the for the approval of life pension for speaker and deputy for any deal in dealing with a seeming notorious emirate, Sharfaddeen a political analyst articulated.

Sharfaddeen was reacting to the story that Kano state house of assembly has approved life pension for its speaker and deputy speaker.

The assembly passed the Pensions Rights of the Speaker and Deputy Bill during plenary Tuesday.

The bill, if passed into law, would also provide for foreign medical trips and new vehicles every four years for the duo.

The bill states the life pension is “provided that either the speaker or the deputy do not hold any paid elective or selective appointment.

The next plenary was said to be in favour of the executive against the Kano Emirate.

Commenting, Dr. Gambino Niemo simply said “he who sows the wind will definitely reap the whirlwind”