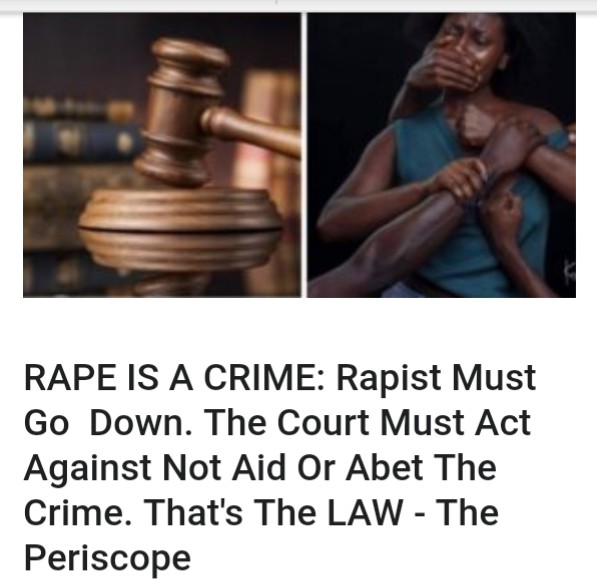 Rape cases, especially of minors, are soaring daily in Adamawa state, Northeast Nigeria; a creative thinker has coined the scenario as a state of growing “paedophilo rapists.”

Report earlier compiled by the Adamawa Coalition Against Rape ACAR, has challenged the judiciary in Adamawa State to clear itself from the allegations that rape cases are being frustrated owing to delay in justice, which eventually leads the rapists go scot-free living the surveyors and relatives with double blow injuries out of what they consider as denial of right to proper hearing for redress.

Responding, the Chief Judge said the allegation could only be considered to be owing to the poverty of idea of how the justice system works; that guilty must be proven beyond any reasonable doubt before action, which has never been intolerable, is taken against the culprit at law.

The Chief Judge revealed this during a conversation with the ACAR officials in his office. There are however proactive measures taken to addressing the challenges of rape brought before the law in the state; one of which is identifying relevant court and competent judge(s) through consultations to handle rape cases properly.

The aggrieved should also report any court judge that is perceived to be handling the case with levity; to be aimed at shortchanging survivors during hearing, with a view to restoring survivor’s confidence in judiciary; assuring impliedly that law isn’t pornographic and judges aren’t predators in the process and while passing judgement. 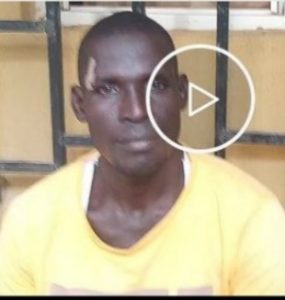 Nathan has confessed to impregnating a minor; his student he claimed to be into intimate? (toxic) relationship, with the tacit consent of her conscientious parents. The teacher- student coerced relationship that was to break all the barriers, he intended to translate to marriage

It was based on the arrengement Nathan claimed that his victim’s parents recommended on request, to engage his pupil in the extramural lessons, which is to later result to unwanted pregnancy, a prelude to unwanted marriage.

What an extra-immoral lesson, learning without teaching good character!

Nathan, as was reported, has also agreed to subdueing the survivor with drugs, whenever the predator in him urged him to sexually assault his pupil turned student yet a minor, who was so scared if not hypnotised to speak out.

Some people who have not seen it any criminal, raping to impregnate a minor- whom the parents would not allow to be married to- hailed by defending Nathan that he has “courageously” acted out of love.

However, in Namtari as in every sane community, Nathan’s act remains a taboo; an embarrassment to the survivor’s entire family whom they share no any near affinity for such intimacy that is aimed at producing a family of bastard children as much as it is indeed an embarrassment to teachers and teaching as a profession.

Having admitted committing the predator crime, Nathan was surrendered to the security. He was eventually sent to serve unbailable awaiting trial in prison as recommended for such crime, when the case was mentioned before the Criminal Area Court Judge in Yola town.

The counsels to the accused called for bail, the prayer would however not be granted by the Criminal Area Court Judge. The disappointed former decided to present a petition latter before the state Deputy Chief Registrar Area Court in Yola.

1. We are Counsels to the Defendant in the above stated case, before Hon. Yakubu TAMBO of Criminal Area Court, Yola.

2. We are informed that at today’s sitting in the said Court, that despite earlier application for bail of the Defendant, the trial judge has refused to admit the Defendant to bail, 46 days after arraignment.

3. That the matter is strictly Civil, as it borders on love affairs between a 16 years old girl and her lover, with tacit consent of parents who have been collecting clothing, money and food from the Defendant. (We have proofs).

4. That the offence for which he is charged is not a capital offence, and refusal to admit the Defendant to bail within 46 days (today 18th October, 2019) is a complete negation of the letter and spirit of the Adamawa State Admin of Criminal Justice Law 2018, particularly Section 159,163,297(1)(3).

5. By this petition, it is obvious, we cannot obtain justice before this Trial Judge and our Client’s rights as contained in ADJL. Section 297 (1)(3) is eroded.

6. Kindly cause to be transferred to the High Court of Justice, the matter, where justice is available, as the position of the Trial Judge is influenced by the peculiar interest he has shown us in Court today.

7. That it is also within the power of your good office to cause the transfer or admission of the Defendant to bail, pending determination of the substantive matter, since the offence did not fall within the province of Section 163 ADJL, 2018.

8. Sir, grateful for granting this application, which is strictly in the spirit of ADJL 2018.

The Counsels claimed that the unwanted pregnancy was resulting from love affairs- between two lovers not a rapist teacher against his student – under the watch of the (corrupt and morally irresponsible parents) who subjected their daughter to prostitution for a miserable amount;

“…the matter is strictly Civil, as it borders on love affairs between a 16 years old girl and her lover, with tacit consent of parents who have been collecting clothing, money and food from the Defendant. (We have proofs),” the petition letter reads.

Love affairs not rape unfair! The Counsels admitted that the survivor was a minor (16 years old) without telling the DCR how old was their client occused of and confessed to have committed seeming criminal offence.

Why should the accused resort to drugging his babe before having sex with her? Is it also out of love?

Is it out of sympathy, kind of support and motivation or the accused simply considered his claimed philanthropic gestures to his promising student with her parents as a bride price kind of license to a carnal love out of wedlock, is that what is obtainable in Namtari community?

Is it within the law that a teacher should take advantage of a minor as student for a friendship that is capable of taking her out of school for destruction with unwanted pregnancy?

The Counsels to the accused criminal claimed that the case was merely civil in nature not criminal Therefore, the Defendant ought to be granted bail failure to which injustice was perceived that should necessitate the transfer of the case to a civil jurisdiction and the granting of bail.

Acting on the petition letter, the Deputy Chief Registrar wrote a letter to the Hon. Judge, Criminal Area Court, Yola town dated 24th October, 2019 to not only respond to the petition against his alleged unfair position on the case but also to release the accused from detention and suspend further action until further notice.

The correspondence from DCR to the Criminal Area Court Judge reads thus:

I am directed to write and endorse the attached complaint for your comment and explanations.

Meanwhile, you are directed to release the accused from detention with immediate effect and stay action until the receipt of further directive from this office.”

Could it be conjured up that the DCR is agreed that the Criminal Area Court Judge has no jurisdiction to handle this case because it is presented as a mere civil case as was argued by the Counsels to the Accused?

Why would the Hon. Judge be suspended from further action on the case that was unanimously agreed to have an accelerated hearing and ruling?

Why should the accused be released from detention on even on bail, when his “love affairs” using drugs against a minor resulted in unwanted pregnancy?

RE AGF VS NATHAN YUSUF

With reference to your letter dated 24/10/19 REF ACD/SB/25/VOLvi//127, in which you requested my comments in respect of the above case.

The accused was brought on FIR on the 2/9/19 on allegation of Acts of gross indecency under section 264 of panel code. The accused pleaded guilty to the FIR. Case adjourned to 19/9/19 for the commencement of hearing.

On that day a counsel by name ELISHA appeared for the defendant with oral application for the bail of the accused person. The prosecution objected to the bail citing maximum sentence of 14 years if proven guilty.

On the 28/19/19, a learned counsel PE KWAYINE appeared for the defendant. And came up with a new written application for bail. We referred him to an earlier application by his colleague ELISHA on the ruling.

The court preferred accelerated hearing on the strength of which both the prosecution and the learned counsel agreed on 24/10/19.

The accused admitted on bail as directed. I have no interest in the case.

I hope my explanation is clear sir

It would appear that what only interested the Criminal Area Court Judge was to strengthen public confidence in the courts with an accelerated judgement to a crime against a community for which the accused criminal has confessed to have committed and that which would not warrant granting of bail.

In Nigerian law, the maturity age is put at 18 years. There is no love in drugging to impregnate 16 years old JSS student (a minor) other than rape out of wickedness and criminality. Rape is a crime; the court must act against, not to aid or abet it.

The survivors and relatives along with the prosecutor, the Periscope investigation can reveal, were not communicated as to why the accused would have to be released from detention pending court ruling and that the hearing scheduled for Friday November 1, 2019 would have to be adjorned indefinitely.

“It was with difficulty we were able to parsuade the survivor’s parents to let their daughter acquire western education because she appeared to be brilliant.

The survivor eventually picked interest to becoming a medical doctor to address the health needs of her immediate community.

Little we did know that sneaking Lucifer was searching for a cracked wall, has pitched his tent within, with the intention to tatter, shatter and scatter the dream of a girl radiating with brilliance at a minor stage.

She’s now reduced to a subject of ridicule caused by the unrepentant nation of Nathans, instead of being taught the subjects that guide her taking the right path to realising her dream of becoming a medical doctor,” one of the relatives lamented.