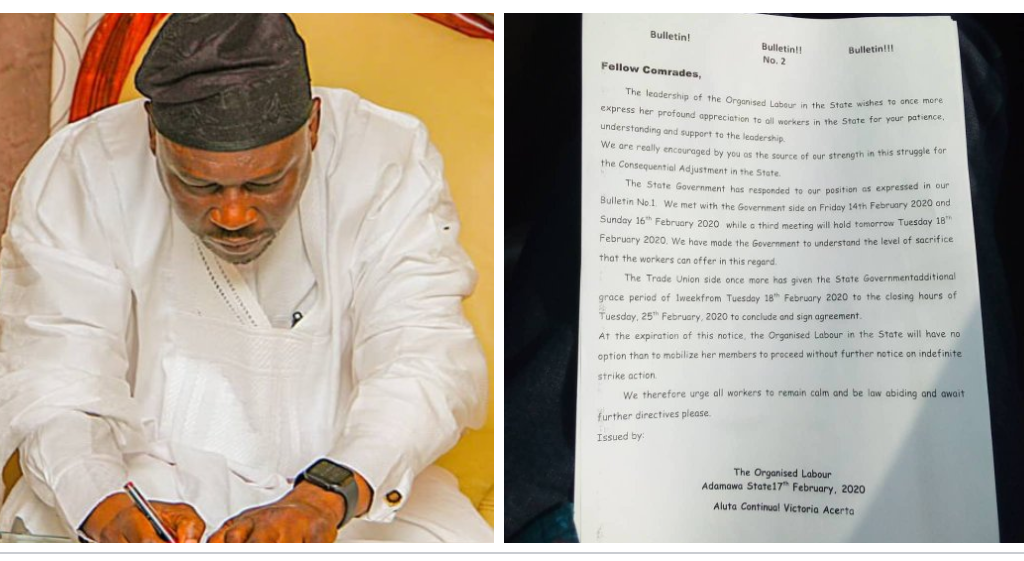 The Organised Labour Adamawa State has given Adamawa state government a grace of one week within which she should actualise the full implementation of minimum.

In its bulletin No2, dated February 17, 2020, the organised labour revealed that there have been negotiations with the government team, which were held on Friday, 14th and Sunday 16th February, 2020 and that it was adjourned to Tuesday, February 18, 2020.

The organised labour, in spite of the ongoing negotiations, has sensed a technical deception, which it felt was only a threat of industrial action that could breath reality into the conversation for industrial harmony.

Having remained patiently waiting for the full implementation of minimum wage, while workers in other states have since been enjoying full implementation of the minimum wage, considering also the promise made by governor Fintiri of Adamawa state to be the first to start the implementation, organised labour has therefore, resolved that should there be no meaningful result by February 25, state government workers should honour the call that suggests putting down tools until the ATM resumes his alert.

In his response to a radically organised labour scripted threat, expressing her position, out of misgivings, concerning the ongoing negotiations on the consequential adjustment in workers’ salaries based on the N32,000 new minimum wage, by means of a bulletin No1 dated February 11, 2020, Dr. Umar Garba Pella the commissioner of information and strategy, has on February 13, 2020 expressed the government’s experienced disenchantment and disappointment with the threatening bulletin, where he suggested that the scribblers ought to have given diplomacy a chance rather than the armory like vituperations, considering a situation whereby it was Fintiri, the ATM governor that initiated and invited the concerned stakeholders to the negotiation table to resolve on the consequential adjustment of workers’ salaries from grade level 7 to 17 and that governor Fintiri has more sympathy to the state civil servants.

“To put the records straight, it was the state governor’s recognition of the vitality of “collective bargaining” that made it to first reach out to Labour to commence these negotiations,

Secondly, government’s Negotiating Team consisted of the Head of Service, seven Permanent Secretaries and three Directors. Government could not have initiated the negotiation process and constituted a high-powered negotiation team only for “wasting scarce resources and time,” Pella articulated.

Speaking to the Periscope labour reporter in Yola, some civil servants commended the leadership of the organised labour they initially thought would betray the course by mortgaging the course for a price.

“It’s not about the governor being the first to implement minimum wage and even increasing it to N32,000. The question is, has the Adamawa government fully implemented the minimum wage? Do you know also that the N32,000 is still less than the N30,000 federal government’s minimum wage? Just find that out from the table.

“It’s not about the governor trying to reactivate ATM to be functioning latest by 25th of every month; trying in the payment of salaries, consider the amount of money saved to have been the salaries of over 3000 sacked Bindow employed workers who would not occupy the police roundabout to peacefully march to the government house in protest because well armed anti riot squads have beat them to the arranged locations. Additionally, it’s only workers from grade levels one to seven that are captured to benefit from the minimum wage increase in Adamawa state, why?

“You see, there are more ‘I will dos,’ than accomplishments associated with this government, hence it is to be trusted like a fox; namely, the loan of N9.9b as approved by the state lawmakers for building of 200 housing unit was collected since, but there is no housing unit. Free education as promised, isn’t at all free as students are charged to pay N650, don’t tell me that healthcare for women and children is free, the skills acquisition scheme is yet to be floated, the promised flyovers are still at their dream state, these are to mention but a few from the promises made. The threat of industrial action is workable. It’s to make the government work the talk. It remains the most listened to language.

“Unlike the sacked Bindow employed workers, we’re are not occupying anywhere to have friction with the security operatives, We’ll only down our tools until ATM resumes with alert, that is if 25th February would not yield fruitful result,” the workers would say.

Those who are sympathetic to Fintiri led government however, feared lest the incident takes a political dimension for the opposition to take opportunity.

“This government is less than a year for God’s sake. Critics should wait until after four years to be able to see clearly and convincingly, whether or not the promises made are accomplished,” David Zirra, a citizen said.