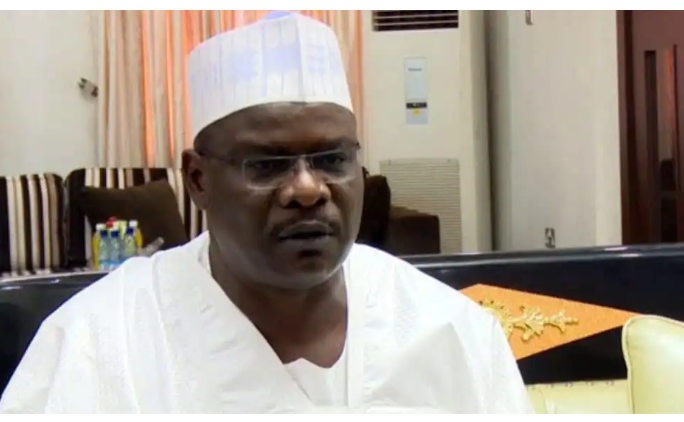 A Federal High Court had on Monday ordered that Ndume be remanded at Kuje Correctional Centre for failing to produce the former Chairman of the defunct Pension Task Team, Abdulrasheed Maina

Ndume, who represents Borno South at the National Assembly, stood as surety for Maina who is standing trial on alleged money laundering charges.

However, Maina has repeatedly failed to appear in court for the continuation of his trial which led to the revocation of his bail by Justice Okon Abang.

And in a statement to DAILY POST signed by its National President, Alhaji Yerima Shettima, AYCF wondered why same court has not ordered the detention of Senator Enyinnaya Abaribe who stood as suretie for Nnamdi Kanu, leader of the Indigenous People of Biafra, IPOB, who is also on the run.

“We, as a youth group from the North, find the arrest and remand in prison of Senator Ali Ndume because fugitive Abdurrashid Maina had jumped bail, as unfair. Much as we are not denying whether,” the statement said.

“Abdurrashid Maina committed offence or not, we believe it amounts to setting bad example if Senator Abaribe – who stood surety for terrorist Nnamdi Kanu is still walking the streets as a free man.

“We cannot fathom why Senator Abaribe, who secured bail for IPOB’s Kanu whose action has since been declared treasonable and terror to the country (and still on the run) has never ever been sanctioned for standing surety.

“In the interest of equity, fairness and balance, Senator Abaribe should be immediately arrested and remanded in prison too, until IPOB’s Kanu is turned it or he turns himself in.

“Both Ndume and Abaribe are senators of the Federal Republic of Nigeria and therefore Abaribe cannot be said to be higher in status than Ndume. Both are lawmakers by the grace of our national constitution and the votes of their constituents.

“Most importantly, we have a duty as a country to demonstrate that in this country, no one citizen is above the other. Significantly, Ndume’s case is such that Maina is still a “suspect” being tried by the law and no sentence has yet been handed down by any court of competent jurisdiction. Still, this cannot be said of Nnamdi Kanu and his treason case.

“We are therefore very disturbed that this is happening to Ndume at a moment democratic power is mainly in the hands of people from Ndume’s immediate constituency. It is this kind of development that gives room for people to accuse the Federal Government of selective application of justice.

“We, therefore, call on President Buhari to intervene and put an end to this embarrassing selectivity against one the North’s exceptionally-vocal, fearless and pro-masses member of the National Assembly.”