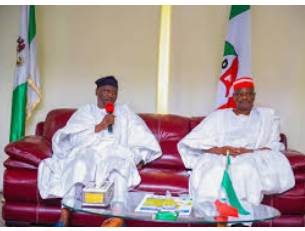 The press release Monday, signed by the Press Secretary to the Governor, Mr. Humwashi Wonosikou revealed that Governor Fintiri who was at the former Governor’s Maitama residence to commiserate with the family, extended his sincere condolences to the former Governor, saying he shared his pain and sorrow with the Kwankwaso family as they mourned the demise of their late patriarch.

Fintiri has urged Kwankwaso who was also one time Minister of Defence to be comforted by the knowledge that the patriarch lived a very worthy and fulfilled life and left a legacy of great achievements for his successors to build on.

“My prayers are with your family in this trying time, I pray that God will grant you the fortitude to bear this heavy loss”. Governor Fintiri said.

Kwankwaso noted that he owed his success to the discipline he got from his late father who worked hard to ensure that they all have good upbringing.

The late Alhaji Musa Saleh Kwankwaso who died on December 25th 2020, at the age of 93
was the District Head of Madobi and Makaman Karaye and Kingmaker in the Karaye Emirate Council, Kano state.