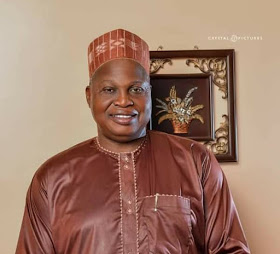 In his ruling, Justice Daniel John, ordered the commissioner of Police, CP Aliyu Alhaji, to arrest the chairman with immediate effect over his refusal to respond to the court summons in compliance with section 41(1) Adamawa Criminal Justice Law.

The Chairman was said to have been served with the court process on the 1st March, 2021 to appear before the court on the 3rd March, 2021, but could not honour the summons.

Reports indicated that the court process was premised by a direct criminal complaint by one Abubakar Abdullahi pursuant to section 111 of the Adamawa State Administration of Criminal Justice Law against the chairman.

Abdullahi told the court that he was engaged by the erstwhile Chairman of the Demsa Local Government, Eldon Danjuma, to construct a block of 2 classrooms and an office at the sum of N4.2 million at Kphasam ward in the local government.

The complainant said that he secured the contract through the Ministry of Local Government and Chieftaincy Affairs sometimes in November, 2019, with an agreement that the contract sum will be paid to him at the end of November, 2019 by the council.

He narrated that he borrowed money and successfully executed the contract as agreed with expectation that he would get his money at the end of the month, but to his dismay, the ex-Chairman failed to honour the agreement.

He averred that he was reliably informed that the money was paid to the incumbent chairman, but he deliberately refused to pay him.

According to him, in spite of the effort of the Member representing Demsa constituency, Hon. Kate Raymond Mamuno, who personally intervened with an undertaken on behalf of the local government boss on the 18th November, 2021, the chairman refused to effect the payment.

The act and conduct of the Fwa, according to the complainant, amounted to breach of trust, cheating, criminal misappropriation and contempt of court under sections 302, 312, 101 and 299 of the penal code law, 2018.

In its ruling, the court presided by Daniel John, issued the bench warrant for the immediate arrest of the Chairman and adjourned the matter to 5th March, 2021 for further mention.