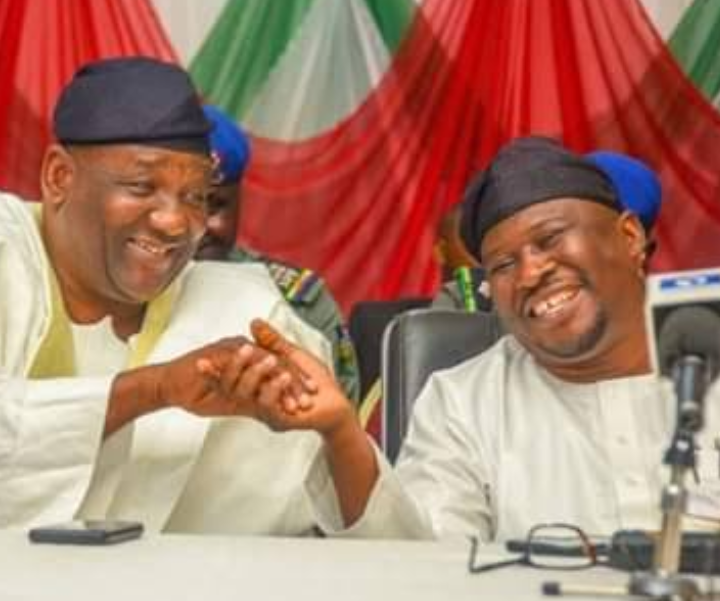 The Concerned Youth for Good Governance, a civil society organization based in Adamawa has read with dismay, how Saharareporters used its ignominious platform to chase shadows by creating superfluous tales from the pit of hell aimed at causing rift between our amiable Governor Ahmadu Umaru Fintiri and his loyal deputy, Crowther Seth.

In a show of journalistic brigandage, the online medium which has earned notoriety for circumventing the norms and etiquettes of the noble profession, true to its character, concocted what will have just passed as a beer parlour gist to the realm of public discuss without caring a hoot about the impact it will make on the profession.

In its desperation to cast a slur on the personality of the deputy governor of Adamawa State, and to put a cog in the cordial relationship that has waxed between the governor and his deputy, the online medium in its September 7, 2021 edition created what will pass as fiction as an “exclusive story.”

Sahara reporters a renegade news portal, has always latched on selling garbage and fake news as its only lifeline for survival at the detriment of editorial integrity just to service the needs of whoever wants to pay for a hatchet job.

That is why they are ready to write shadowy and lowly speculations about relationships between individuals instead of writing developmental reports that will salvage individuals and communities at a time Nigeria is grappling with national crisis that needs the intervention of serious journalists to address.

It appears to us the medium’s audacity for these negative and unwholesome conducts lie in the failure of the authorities to ensure that the long arms of the law caught up with the errant medium coupled with the fact that Nigerians are ready to buy their garbage, hook, line and sinker.

But such tendency should not be the stuff of media organizations in the 21st century where respect for laws, sanity and moderation should be the watch words.

Ordinarily, our group wouldn’t have responded to such speculations as contained in the highly discredited news medium but noting the tension such villainous and mischievous report is causing in the polity, it became necessary to write, to set the records straight.

This is because if left unchallenged, such spurious, libellous and mendacious reports may gain currency in the minds of the citizenry as it is said silence in the face of such falsehoods is not golden.

From the look of the dreary report, one can see clearly an attempt to paint the deputy governor with the brush of ingratitude who despite the lot he received, go about accusing the governor of neglect which is not the actual stuff of the deputy governor whose preoccupation is to ensure that this administration against all odds succeed.

Common sense should tell any discerning individual that the success of governor Fintiri’s administration will rub his deputy positively and its failure will also affect him negatively. But for primitive political partisanship, those bankrolling the sordid bunkum failed to factor this elementary line of thought.

Another inclination for this descent may perhaps be predicated on envy, avarice and the resort to settling of personal or political scores through dubious means as some aggrieved people who find it difficult to appreciate the deputy governor’s meticulous ways of handling state affairs, may resort to blackmail because the deputy governor always insist that the right things must be done and the scarce resources of the state will not be frittered frivolously for political correctness.

It should be noted here that the office of the Deputy Governor was constitutionally recognized to carry out state responsibilities as may be assigned by the Governor, His Excellency, Ahmadu Umaru Fintiri.

Primarily, the Deputy Governor is to deputize for the Governor on all state matters as may be delegated and Chief Crowther Seth has been consistent, loyal, obedient and upright in the discharge of these onerous responsibilities to the admiration of true and loyal Adamawa patriots.

For Sahara reporters to have mentioned that there is sour relationship between Governor Ahmadu Umaru Fintiri and his Deputy Chief Crowther Seth despite carrying each other is not only libelous but wicked, false and disgusting.

It is equally reprehensible for the medium to equally state that ‘the Deputy Governor is a liability and politically irrelevant.

For the record, Chief Crowther Seth was a two term local government Chairman of Lamurde local government and a bonafide member of Peoples Democratic party ( PDP) since 1999 up to date and has never defected to any political party.

He participated and contributed immensely to the emergence of the present PDP led Government. Chief Seth, has a strong political clout and contrary to the speculations of Saharareporters, he hailed from Bwatiye tribe, one of the major tribes that occupied about nine local governments in Adamawa State.

He is the ‘Nzeanzo Bachama’ a strategic traditional title in Bachama kingdom, Southern Adamawa. Therefore, the intent of the author to portray the deputy governor as politically irrelevant on account of his tribal inclination is nixed by this revelation. It also underscores how lazy the medium in cross checking basic and simple facts which are already on the front burner. Such crass and a woeful failure is a minus to journalism.

Every right thinking Nigerian knows how the COVID-19 pandemic affected the economy and the MDAs. And so it has affected what accrues not only to the deputy governor but the state government Federal Government and other nations. It is therefore trite for someone to forward such uninformed notion if he is really equipped with the debilitating effect of COVID-19 on global scale.

The deputy governor appreciates the governor for his efforts to rejuvenate the economy despite the impact of the dreaded disease and has always been on the vanguard of frugal use of the scarce resources compelling him to shed unnecessary office load.

If Saharareporters have done a little investigation, they should have found that the official residence of the Deputy Governor was contracted by the Governor for renovation to enable the Deputy Governor relocate and carry out his duties as such he could not have complaint on the issue.

Chief Crowther Seth willingly reduced the retinue of his convey and all his entitlements have been paid accordingly if applied for.

So bringing the issue of payment of entitlements was another low point in that report and has portrayed the innate intension of the paper to cause rift between the Governor and his Deputy. It is so repugnant that Sahara reporters did not make any effort to verify these issues with the deputy governor, an action that is obverse to the spirit and letters of the noble profession.

The Deputy Governor has been pivotal in peace building of the state, of recent was how he is dialoguing with Gombe state authorities on Waja/Lunguda crisis.

We strongly advise Sahara reporters to review it’s editorial policies by dwelling on responsible Journalism rather than blackmail or yellow Journalism at least for posterity sake.