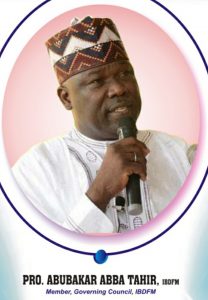 The University of Maiduguri Alumni Association UMAA, would inaugurate a nationwide Unity Walk Campaign in the entire states of Nigeria and the Federal Capital Territory scheduled for Saturday December 1, 2018.

In a press statement, Abubakar Abba Tahir the president UMAA Adamawa state chapter, explained that the campaign was aimed at reuniting graduates of the University and promoting the spirit of exercise to stem the tide of preventable terminal diseases.

Tahir said that the entire state chapters of UMAA would undertake the Unity Walk from 8am, could roundup before noon.

However, in Yola Adamawa State, the Unity Walk would start by 6:30am to be able to beat the sun, which rose early at dawn.

Tahir said that the five kilometre walk to be led by its sponsor the SSG Adamawa State Dr. Umar Bindir, supported by the Head of Service Dr. Edgar Amos, would take-off from 80-Units Junction the western end of Abdullahi Bashir Way, Dou-Girei, passing through Kashim Ibrahim Way and would be terminated at the Cow Roundabout by the Benue River Bank, Jimeta.

Parking Options were provided as follows:

2. Left and Right Wings of Abdullahi Bashir Way as you drive eastwards;

3. NADI International School @ Dou-Girei High-ground. Members can park most of their vehicles within NADI Premises and drive to the Muster Point with Fewer Vehicles to take-off from the Western end of Abdullahi Bashir Way.