Will Adamawa High Court have any ground for ruling on election matters after election results are announced? 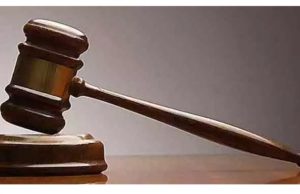 The candidate of the Movement for the Restoration and Defence of Democracy (MRDD), Rev Eric Theman Popularity called Dollars, , had gone to court immediately after the March 9 governorship election to file a case that he was denied the right to be voted for as his party logo was not on the gubernatorial ballot paper.

Eric asked the court for an injunction stopping the conduct of a rerun already announced at the time after the main election was declared inconclusive.

Eric also asked the court to declare the main election null and void for the same reason that he was not duly entered for the election after having fulfilled all the requirements for inclusion.

The court promptly granted his prayers of injunction against the rerun, which stayed until the same court lifted it on Tuesday, following which the Independent National Electoral Commission (INEC) fixed Thursday, March 28, for the rerun election.

The court Thursday, heard arguments for and against the originating motion, seeking the annulment of the March 9 election from plaintiff and defence counsels, and adjourned judgement to Friday.

Counsel to INEC, Bar Stephen Ibian, argued, among other things, that the MRDD was not included on the ballot paper because the candidate did not nominate a running mate for the election, adding that the necessary forms of INEC in respect to the MRDD showed that the party did not sponsor a running mate.

“The reliefs sought constitute an academic exercise and not grantable,” he concluded.

Defending MRDD’s motion, however, the counsel, Bar Mustapha Ibrahim, told the court that the MRDD did present a running mate to the governorship candidate but that the documents INEC was tendering had a vital page missing, which he said amounted to withholding of evidence.

“It is inconceivable for INEC to receive form 001 (as it did) and not Form 002 because they come together,” Bar Mustapha Ibrahim said, urging the court to grant the reliefs, his clients sought as the reliefs were well grounded.

The trial judge, Justice Abdulaziz Waziri, who had been emphatic since Tuesday that the week would not end without him delivering judgement on the case, brought Thursday’s session to a close a little after 1pm, urging counsels who had not provided details of all authorities for the cases they cited in their arguments to do so by midafternoon so he would have time to conclude the writing of his judgement against Friday.

The judgement could have a telling effect on the ongoing governorship election process. If he annuled the election, it would bring the process to zero level. Although the People Democratic Party (PDP) and its candidate in the election, Rt Hon Umaru Ahmadu Fintiri, who are parties to the case and have always questioned the jurisdiction of the court over the case, would be certain to appeal such a judgement.