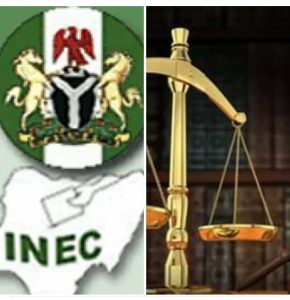 The INEC returning officer of Adamawa State, Professor Andrew Haruna said, having scored the highest votes and having satisfied the requirements of the law, he returned Rt Hon Ahmadu Umaru Fintiri as the governor elect.

Fintiri won the contest with a margin of 40,156 votes, ahead of his major contender and the incumbent governor of Adamawa State Sen. Muhammadu Umaru Jibrilla Bindow.

Andrew said Fintiri won the contest by scoring 376,552 votes far ahead of his major contender governor Bindow who scored 336,386 votes.

Andrew noted that Adamawa state has a total of 1,973,083 registered voters but the total number of accredited voters stood at 905,346.

The Periscope Global Investigate, earlier reported that APC has not been represented by its agents or party officials at any of the polling units during the rerun election Thursday.

While this was observed by some commentators as passive action of a pessimist who could not challenge defeat, some observers on the constitutional aisle, interpreted the seeming tactical withdrawal as being active action of the optimist not wanting to waste strength, resources and time in nullity.

“There’s a breach of fundamental human rights against a party and its gubernatorial candidate. It is being challenged before the court of law.

“Omitting a logo of a legitimate political party from ballot paper, amounts to disenfranchisement, a violation of right to be voted for. It is not and electoral offence for electoral tribunal to entertain. A Adamawa High Court, sitting in Yola for it’s judgement to be passed on Friday, being tomorrow, should be respected,” a political pundit sympathetic to APC Bindow would argue.

“This amounts to fantastic ostensibly, absolute absurd nonsense, lacking any critical but criminal thinking. I will not want to be rough tagging it as political lunacy or ill informed nudity.

“Governor Bindow and ACP ought to have hearkened to advice to concede defeat long before now that they are left with the Hobbesian choice.

Eric Dollars and MRDD should prepare their case for election tribunal, should they feel shortchanged, now that gubernatorial supplementary election has been conducted peacefully and fairly for a credible outcome,” a political pundit sympathetic to PDP Fintiri remarked.

The candidate of the Movement for the Restoration and Defence of Democracy (MRDD), Rev Eric Theman, Popularity called Dollars, had gone to court immediately after the March 9 governorship election to file a case that he was denied the right to be voted for as his party logo was not on the gubernatorial ballot paper.

Meanwhile, there are jubilations, celebrating PDP Fintiri’s victory not only by PDP diehard supporters but by some aggrieved APC and ADC supporters.

However, the diehard APC members and supporters along with the critical minded argued that it is not yet Uhuru; “it’s not yet over until it’s over.