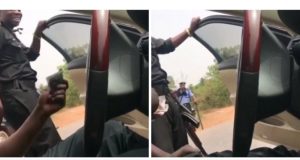 It was thought that the salary increment benefited by policemen would go a long way restoring their integrity against any form of extortion. However, the bad eggs among the security men would not be contented by whatever amount for a salary increment.

The policeman was not aware that the transaction extortion was being videotaped.

For a dime, the policeman with his team, did not give it a damn whether or not it was a criminal conspirator conveying incriminating goods provided that the transaction extortion against motorists would be succumbed by the latter.

A man driving along Lagos/Badagry express road was stopped at a police mounted checkpoint. The language for identification was not identity card, drivers license or any vehicle particulars. The language was simply “drop money.”

They were four in number, the policeman seemed to be arguing. For the man to be able to be cleared, he must have to part with N4, 000.

“On seeing the video that went viral, an old woman exclaimed, “na wa wo!”