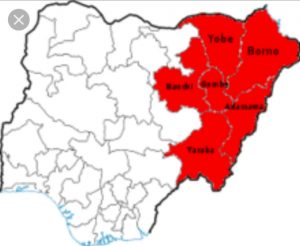 After the victory, comes the struggles and lobbies for political appointments. The northeast was said to be a good beneficiary of the presidency produced by 2015 election; local government areas, towns and villagers, hitherto occupied by the BH insurgency, were recaptured, peace and normalcy restored.

In terms of employments and appointments to key responsibilities, the northeast as observed, is not left out, the SGF, the chief of staff to the president, the national security adviser, the chief air staff, the chief of army staff, the custom boss, the EFCC boss, the INEC chairman, the capital territory, education and other ministers, in addition to having the wife of the president, among others, enough to reciprocate by bringing back Buhari, in “doing as it is done unto you.”

Speaking to the Periscope Global, A Yobe based electorate faithful to APC, Mai Gana Musa, having commended Gombe, Bauchi, Borno and Yobe states for mandating President Muhammadu Buhari, reflective of reciprocity, lamented that Adamawa and Taraba states have not expressed a resounding gratitude in having PMB return elected during the 2019 presidential election.

Musa said Adamawa and Taraba should only be given state ministers while forming a new cabinet after May, 29 swearing in.

“In spite of the position of SGF and the minister of the capital territory among other favourable appointments credited to, Adamawa state could not honour by acknowledging the party that produced their in-law for a president. She simply voted against Buhari suggesting that they were either misrepresented by the appointed or nothing could lure them to loving Mr. President and his party. Suggesting also that the crowds of electorates during the presidential rallies in the state, were mere figment of imagination or just pretentious.

“Taraba state has never voted for Buhari. Even Sen. Aisha Alhassan the appointed but eventually resigned minister from the state, was not hypocritical revealing to the world that she was not of divided loyalty. It was just the form, her spirit wasn’t with President Muhammadu Buhari.

“One of the ways to commend the states in the northeast that gave total mandate, is the ministerial appointments among other political considerations.

“Adamawa and Taraba states, the seeming twin sisters, can make do with the state ministers, since every state should have a minister. The office of the SGF should equally be reconsidered,” Musa opined.

Mohammed Ismail an online publisher and critical thinker, argued that Bauchi is truly a Buharist state than anywhere beyond northeast, irrespective of the political appointments enjoyed.
Borno and Yobe have something akin to taboo associated with any other than the political party President Muhammadu Buhari belongs to.

“Borno the BH insurgency worse hit state, having been liberated, would have no better alternative to President Muhammadu Buhari.

“Besides, the Chiefs at the Presidency. Talking about the Chief of staff Abba Kyari, the national security adviser Baba Gana Monguno, the chief of Army staff Yusuf Buratai, and the EFCC Boss Ibrahim Magu are all from Borno state,” Ismail would share his critical thought.

Haruna Yusuf Abuja based publisher and media mediator, was in Damaturu, Yobe state. He revealed to the Periscope Global that added to the Buhari factor, was the grass rooted impact the Yobe governor elect Hon. Mai Mala Buni.

“Don’t forget that the Yobe governor elect, Hon. Mai Mala Buni, has been a key figure at the APC national secretariat and eventually, the ruling party’s national secretary before being elected governor with landslide victory during the 2019 gubernatorial election in Yobe state, owing to his loyalty, humility, integrity, generosity, commitment, diligence and dedication to assigned responsibility rather tirelessly, which form the background to his indefatigable leadership quality.

“Unlike Adamawa, Bauchi and Borno in the northeast, Yobe though an entirely APC, the state hasn’t gotten a number of political appointments at the national level in the 2015 political atmosphere.

“Yobe needs to be reconsidered while forming the 2019 presidential who is whos without any brouhaha,” Haruna hammered without stammering, with yet to be exhausted stamina.

Nura Mohammed has been registering grievances, nuances, noises and the silent voices in and from Adamawa state. He analysed that it was not the electorates but conflicts of interest within the ruling party, the APC that led to its defeat during the 2019 presidential election. Even though the performance of Adamawa governor without considering civil servants, pensioners, contractors, education and healthcare sectors in addition to his double standard, would not be ruled out.

“The chief of Army Staff General Yusuf Buratai is said to have lobbied for the establishment of a university in Biyu, Borno state, while his brother the EFCC boss is commended for addressing the issue of corruption.

“Being a conscious indigene, the Chief of Air Staff Sadiq Abubakar is said to have lobbied for the establishment of a comprehensive nursery, primary and post primary school in Bauchi state, while his brother General Hamid Ali rtd. the Custom boss sanitises the Nigeria custom service by weeding corruption out of the scheme and improves the nations revenue and the Minister of Education Malamute Adamu Adamu has helped in making the Tafawa Balewa University of Technology to read science and technology to be able to accommodate a medical college and run managerial courses.

“In Adamawa state lies a war of the Titans that the electorates are, for the most part, submitted to play the knights for a chase game.

“The political appointees could not win the confidence of the electorates for having nothing to show as their contribution to the state other than the interventions by Dr. Aisha Muhammadu Buhari through the Future Assured, the NGO she established doing humanitarian good by intervening in education, healthcare, youth and women empowerment, advocating for unity, peaceful coexistence and progress and recognising excellence, among other achievements.

“Dr. Aisha is the wife of President Muhammadu Buhari. While she received commendations, some politicians in the state condemned her intention to build a university in collaboration with independent agencies abroad, however private in the state,” Nura said.