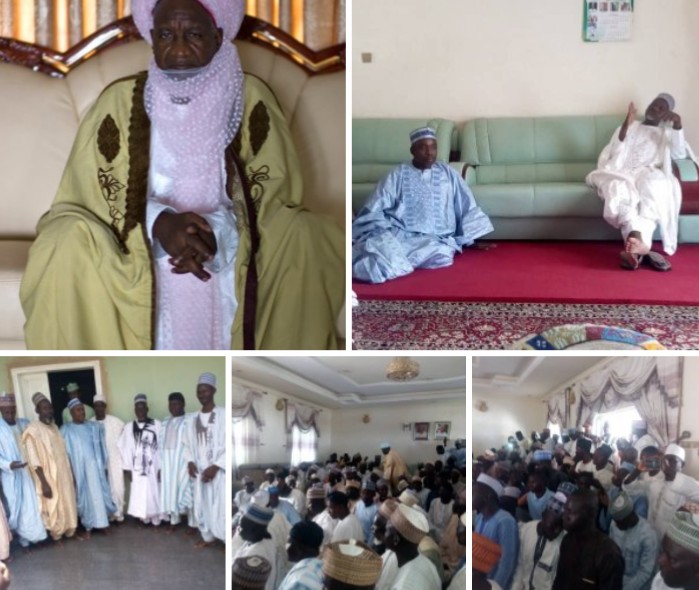 Barr Mahmud in company of the teeming delegation from Jalingo-Maiha District were on a mission to welcome, commend and congratulate the monarch for an accomplished assignment in ensuring, peaceful and acceptable Hajj exercise as was assured.

Addressing the monarch, Barr Mahmud said that they have visited the palace to pay Salish homage some months previously and were well received by the council members.

Mahmud said that the second visit was aimed at welcoming the monarch back from Hajj pilgrimage and to commend him for the accomplished responsibility as 2019 Amirul Hajj, the first to be appointment by the fresh air government led by Rt Hon Ahmadu Umaru Fintiri of Adamawa State.

The monarch known for his everyday sermons admonished Barr Mahmud the Emirate Council selected Ubandoma Mubi and District Head of Jalingo-Maiha, to keep on keeping his romance with peace, patience and perseverance. They were indeed parts of the qualities of a worthy leader.

The monarch has commiserated with the people of Jalingo-Maiha over the attack by an impostor with his gangs on Friday, where he reiterated that “there’s no one who is above the law. Arrogance has its limit, patuent is limitless.”

Violation of court and and executive, orders, intended to cause dissensions for anarchy and mayhem would not make one a district head anywhere not only in Jalingo-Maiha. The reinterpretation of the Monarch’s sermon would issue this understanding.

Barr Mahmud’s train of entourage to the monarch in Mubi was more than 500 people. Impressed by the number, the peaceful conduct and maturity, the palace guards recommended that it was the Ubandoma Mubi with his peaceloving people of Jalingo-Maiha

“It is only Ubandoma Mubi that is addressed as District Head of Jalingo-Maiha District.

“Ubandoma is one of the kingmakers in the Mubi Emirate. If one has never been a heir to Ubandoma Mubi, he has no head or even a hair to be turbaned as a District Head of Jalingo-Maiha District.

“The impostor has his limit and shall soon swim in his Waterloo,” a council member of Mubi Emirate would reveal to the Periscope reporter.

The court jester on sighting Barr Mahmud with his entourage for homage to the monarch of Mubi, commented that “Here comes the Ubandoma; the legitimate District Head of Jalingo-Maiha District with his teeming men of honour making his entourage.

“This is not a group of shameless, street-eating, remnants of flies suya touts, scallywags and the chronic-know-nothing thingified by an impostor as their leader for a dry homage lacking legitimate portfolio.

“Its well with you Ubandoma and your highly honoured entourage. The palace welcomes you with dignity as there’s nothing digital or paliament about you,” the court jester would accompany the delegation with priceless praises of honour and respect and Barr Mahmud Abubakar Suleiman’s proven, rather genuine generosity from birth, knew no bounds as was appreciated by the palace guards.

All is set for Adamawa 2019 IBDFM MCPD, Induction, Investiture – Dodo