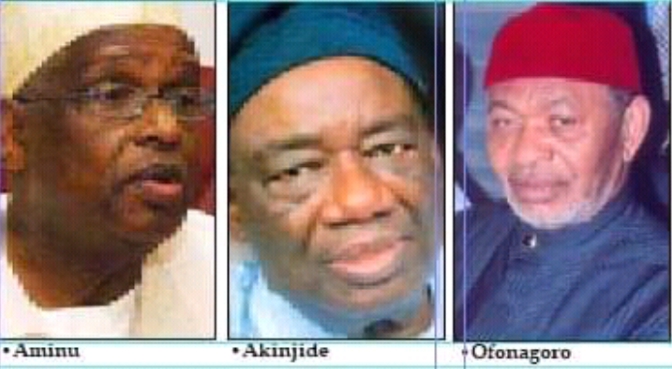 ONCE in a while, this column does a retrospective on persons who have figured in the news for better or worse but have somehow fallen off the news radar, including those who were famous or used to be famous for being famous.

This installment resumes that tradition after a long interlude.

Whatever happened to Professor Jubril Aminu, eminent cardiologist, formerly executive secretary of the National Universities Commission (NUC), professor of medicine, vice chancellor of the University of Maiduguri, Minister of Education and Minister of Petroleum Resources under the regime of military president Ibrahim Babangida, ambassador to the United States, and most recently a Senator of the Federal Republic?

At the NUC and the Ministry of Education, Aminu was the scourge of vice chancellors and the Academic Staff Union of Universities. He inveighed, not without justification, against what he called the “proliferation of professors.” I wonder what he would call that tendency today. The “mushrooming” of professors?

She was awarded a second term one full year before her first term ended, whereas, at the University of Ibadan, they kept Professor Ayo Banjo in limbo for almost one year before granting him a second term. Then, as now, it helped to have friends in high places.

Aminu had a bad press. They said he was haughty and high-handed, but he couldn’t care less. He said he did what he had to do according to his best judgement and moved on. He was content to let the facts and his conscience be the judge, though he was often loath to publicize acts of great personal kindness and official consideration that would have dampened, if not punctured, charges of parochialism that trailed him in his public career.

My last interaction with him occurred when he was serving as ambassador to the United States. Shortly after he arrived at the post, I called his office and asked to talk with him.

“Does he know you?” his secretary asked courteously.

She told me the ambassador was at a meeting and would ball me back.

Some 30 minutes later, the phone rang. It was Aminu.

“Olatunji, you ran away,” he said, more in jest than in rebuke. He was referring to my leaving Nigeria when Abacha banned The Guardian and many private media outlets and rendered the practice of journalism exceedingly fraught.

Some banter followed, after which he gave me his telephone number at the residence and said I should feel free to call him after hours. And if I was visiting Washington DC, I was welcome o lodge in the embassy’s guest house. I never took him up on the latter offer, but whenever I called the residence, he either took the call in person, or called back if he could not.

A good number of fellow expatriate Nigerians told me that their encounter with the ambassador was just as pleasant and gratifying.

I recall vividly the challenge my family faced when my and I had to obtain new Nigerian passports for ourselves and two of our children. The rules demanded that all four of us go to the nearest issuing office (Washington) to have our biometrics captured for the purpose. This unreasonable demand plunged many a family into credit card debt, loss of income, and great inconvenience.

In our case the challenge was especially formidable. We have an autistic son who is difficult to manage when thrust into unfamiliar settings. I brought the matter up with Aminu, and he asked me to request a waiver in writing.

A few days later, a letter came from the chancery saying we should send our application material for new passports. We did not have to come to Washington DC; the ambassador had waived that requirement.

In theory, any ambassador could have done that. In practice, how many of them would have summoned the independence, the judgment and the fellow-feeling to do it?

That was the essential Jubril Aminu.

Aminu was probably still in medical school when Chief Richard Akinjide was elected to the Federal House of Representatives on the platform of the NCNC, one of its youngest persons to achieve that distinction, later serving as Minister of Education in the NPC-NNDP coalition government until the collapse of the First Republic.

Reputed for his forensic brilliance – he belongs in the second set of Nigerians to be conferred with the SAN – Akinjide is best known for the ingenuous formula which moved the Federal Electoral Commission to hold that by, winning the most votes in 12 of the 19 states of the country, and in one half of two-thirds of a 13th State, the NPN candidate Shehu Shagari had won a plurality in each of at least two-thirds of the states of the federation as stipulated by the Constitution, and thus the presidential election outright.

The Supreme Court affirmed, and the joke was on those who had dismissed Akinjide’s formula as crack-brained. In the legal battles that pitted the Federal Government against the states controlled by the Opposition in the Second Republic, Akinjide was a constant figure as Minister of Justice and Attorney-General, smirking as the courts did the government’s bidding in case after case.

Returning from self-exile following the overthrow of the Shagari Administration, he continued his brilliant advocacy, often doubling as a public intellectual.

His daughter Oloye Olajumoke Akinjide, a former minister of state for the Federal Capital Territory under the Goodluck Jonathan Administration, has been having a running battle with the EFCC over the misappropriation of some N650 million, little more than pocket change to minor functionaries in some federal establishments.

She has even offered to pay back the sum at issue, but the prosecutors would not budge. And yet, her father has not come up with some recondite forensic doctrine to put an end to all that nonsense.

Where is Chief Richard Akinjide?

I should also ask after Sani Abacha’s favorite historian and media coordinator, Dr Walter Ofonagoro. As Abacha Minister of Information, he continued the unfinished business of Verdict 83, concerned as always to appear clever for one opportunistic moment rather than make society wiser.

On seizing power, Abacha had declared that June 12, 1993 presidential election presaged a vast promise for Nigeria. Later, as he tightened his grip on power, he declared that the election was “inconclusive.” Later still, he would dismiss the election as “illegal,” a claim that military president Ibrahim Babangida who annulled the poll had never made.

Ofonagoro took up the matter from there and compiled a tome crammed with documents of dubious authenticity in a desperate effort to lend pseudo-scholarly support to Abacha’s revisionism.

The same Ofonagoro had served as communications director of the defunct National Republican Convention and a close adviser to its presidential candidate, Bashir Tofa. One of the enduring images of the historic election was television film footage of Tofa driving from one polling centre to another in a futile bid to cast his ballot – futile, because he had not bothered to register to vote. But since Abacha had declared the poll illegal, that must henceforth be the verdict of history.

When Kudirat Abiola was murdered by Abacha’s goons, Ofonagoro stopped just short of saying that she got what she deserved. When Abacha’s agents provocateurs were hurling bombs at federal installations and crowds of innocent Nigerians, Ofonagoro said it was the handiwork of a certain septuagenarian based in Owo, in Ondo State.

When a caller who identified himself by an Igbo name took Ofonagoro to task during a live call-in show on Radio Nigeria, Ofonagoro denounced the caller as a NADECO sympathiser fraudulently parading himself as an Igbo.

Because, said Abacha’s favourite historian, no true Igbo man would stand up for June 12.

Under Ofonagoro, the NTA would not announce, much acknowledge the death of Afro-beat king Fela Anikulapo-Kuti, whose creative genius had contributed hugely to stamping the music of Nigeria and Africa on the world’s cultural map.

Drawing his inspiration from Kim Il Sung’s North Korea and Saddam Hussein’s Iraq, Ofonagoro sought to return the Nigerian press to the era of licensing and to make defamation a penal crime.

Lost on Abacha’s historian-in-residence was the elementary truth that when you have employed the media ceaselessly to alienate and brutalize and insult and stultify the public, you cannot employ the same media to mobilize that very public for nobler ends.