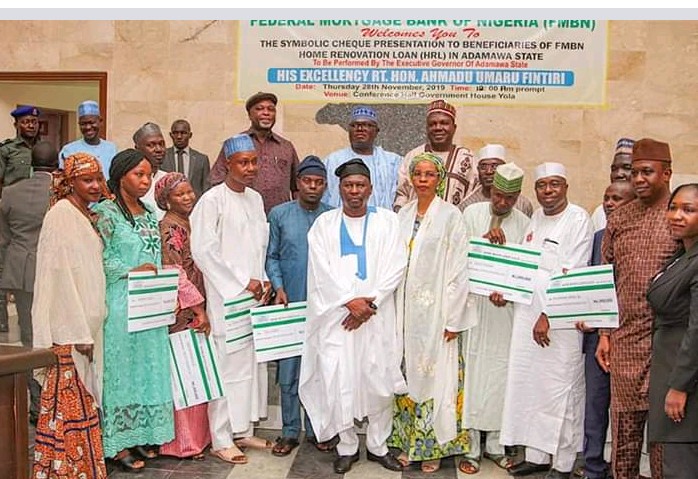 At the ceremony, which was held in the Government House, Yola Fintiri congratulated staff and management of the Mortgage Bank for living up to expectation in their service by offering the loan to state government workers.

The Governor called on the workers to find this gesture worthy and make judicious use of the loan, stressing that his administration has also keyed into benevolent programmes for the welfare of civil servants.

Fintiri said the present administration has commenced building of two thousand houses for civil servants to complement what the mortgage bank was doing in the state, which according to him, would add impetus to the efforts of government.

Fintiri particularly commended the Executive Director loans and mortgage services of the bank who is an indigene of Adamawa for making the state proud and charged people of the state wherever they are, to put in their best for the benefit of the state.

While reiterating the commitment of of his administration to take decisive action on any irregularities in the civil service, the Governor expressed worry on some erring practices in the work force and vowed to review it in order to reposition the sector.

In his remark, the Managing Director and Chief Executive Officer Federal Mortgage Bank of Nigeria Architect Ahmed Musa Dangiwa represented by the Executive Director of loans and services of the bank Hajiya Rahimatu Aminu Aliyu spoke on the mandate of the bank.

Architect Dangiwa said the made was to provide affordable mortgages to Nigerians through the National Housing Fund Scheme and the fund was sourced from 2.5% of the basic income of Nigerian citizens who are eighteen years and above.

Dangiwa thanked the Adamawa state government for creating enabling environment for civil servants in the state to benefit from FMBN Home Renovation Loan for another round of disbursement to the tune N442,620.

Dangiwa said FMBN has executed housing projects in the state, which included four hundred completed houses in Wauru Jabbe Jimeta Yola, one hundred Behind Shagari Quarters in Yola town which was 97% completion and ongoing sixteen in Rumde Gobo, Yola town.

In his vote of thanks on behalf of the beneficiaries, Malam Aminu Mohammed thanked the state government for standing in as their guarantor to access the loan and promised to utilise it judiciously.

Highlight of the event was presentation of checks to some of the beneficiaries by Governor Umaru Fintiri.