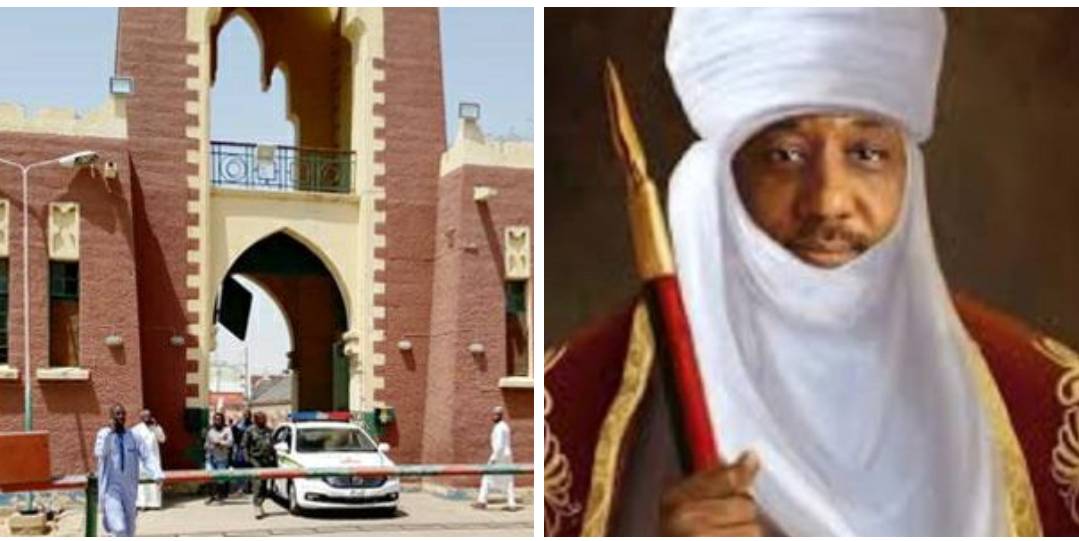 His Highness Sanusi II, has threatened a legal action against Ganduje led government over apparent violation of his freedom, dethronement and banishment.

The legal threat was issued by a legal team representing His Highness, led by Abubakar Balarabe Mahmoud SAN on Tuesday in the afternoon at a Press Conference in Kano

The following is the full text of the press statement:

PRESS STATEMENT BY THE LEGAL TEAM OF MALLAM MUHAMMADU SANUSI, II, CON ON HIS ILLEGAL DETHRONEMENT, DEPORTATION AND BANISHMENT TO NASSARAWA STATE BY THE KANO STATE GOVERNMENT

Gentlemen of the Press, a very good afternoon.

I thank you for coming to our office this afternoon for the purpose of this press briefing on behalf of our client Muhammadu Sanusi II who was yesterday morning, the 9th day of March 2020 deposed as Emir of Kano by the Governor of Kano State Dr. Abdullahi Umar Ganduje who claimed to have acted on a resolution of the Kano State Executive Council.

This action is our view is illegal and unconstitutional.

The reason given in the letter of deposition of the Emir dated 9th March, 2020, was alleged ‘disrespect to lawful instructions from the authorities’.

The Emir was also alleged to have ‘refused to attend official programmes and meetings organised by the Government’,

As far as we are aware, there has not been any notice of such disrespect ever given to the Emir or query issued to him for refusal to attend official functions. He was never given any opportunity to defend himself against those charges.

Section 13 of the Kano Emirates Council Law 2019 cited in the letter of deposition empowers the Governor to depose an Emir only after due inquiry and in consultation with State Council of Chiefs.

We are not aware of such due inquiry nor are we aware that the Kano State Council of Chiefs was at any time summoned to any meeting much less discuss the removal of the Emir or give any advise to the Governor on the deposition.

Muhammadu Sanusi II was the Chairman of the Council and if such meeting was summoned, he would have been aware. He would have informed us.

In our view the action was patently illegal and unconstitutional and a clear abuse of power.

Be that as it may, the decision to challenge the removal is solely that of Emir Muhammadu Sanusi II. At this moment no such instruction has been given to us.

Since the deposition was announced, I was at the Palace yesterday afternoon in the company of one of my colleagues to consult with the Emir.

We met him in good spirit in company of his family and a few associates. He said to us that he was waiting for the deposition letter from the Government House and was informed that the Commissioner of Police was on his way along with certain government officials.

While waiting there was commotion in the private wing of the palace as some unauthorised persons tried to gain entry into the family section.

I subsequently, along with my colleagues was able to meet with the Commissioner of Police and other security operatives and with the permission of the emir, they were led to one of his sitting rooms where the deposition letter was served on him by an agent of the State Government.

The Emir accepted the letter and decided to acknowledge it personally after writing some Quranic Verses in the Arabic script along with his signature.

This was handed over to the government official.

In the letter of deposition, it was stated that the Emir was to be removed to Nassarawa State.

We requested to know if he was under arrest and if so we needed to see the warrant. The Commissioner of Police informed us that he was not under arrest.

We informed the Commissioner of Police that was illegal and violation of his constitutional rights to remove to Nassarawa State against his wish.

The Emir informed the Commissioner of Police that his friends had sent an aircraft to fly him and his family to Lagos and requested that they should be provided with necessary security to the airport so that he could leave.

The Commissioner refused saying that was not their instruction.

They were willing to allow the family to leave for Lagos but he was to be flown to Abuja then onwards taken to Nassarawa State.

It was clear to us that both the Emir and ourselves were helpless and the police and other security agents were willing to take any measure and use force to achieve their objective.

In order not to jeopardise the Emir’s safety or the safety of any member of his family or indeed other persons around, the Emir decided to cooperate and proceed in the vehicles provided by the operatives.

We accompanied the Commissioner of Police to the Nigerian Airforce base in Kano where the Emir was put a private aircraft and departed at about 6.40pm.

The family subsequently boarded the aircraft arranged by his friends and departed for Lagos about 15 minutes later.

Gentlemen, we have not spoken to the Emir since yesterday but we understand they are at their destination somewhere in a remote part of Nassarawa State after driving for nearly seven hours in the night and arrived at about 2.00 am this morning.

We understand the choice of location to detain HH Muhammadu Sanusi II was intended to cause maximum trauma and distress. This again is illegal and unconstitutional.

According to instructions we received from the Emir through his Chief of Staff, we are directed to take legal action to challenge the legality of the Emirs detention and banishment.

We are of the firm view that this action is illegal and unconstitutional.

Section 35 of our constitution guarantees every citizen the right to personal liberty. The basis of the denial of personal liberty are set out clearly in this Section of the Constitution. None applies to the case of the Emir.

The archaic practice of banishment of deposed Emirs, a colonial practice has no basis under Nigerian law or the Constitution.

We are totally perplexed at the resort to this practice in present day Nigeria by its political leaders.

The illegality of this practice was pronounced by the Nigerian Court of Appeal in Attorney General Kebbi State v. HRH Alhaji Al Mustapha Jakolo and ors 2013 LPELR 22349/CA where the Court pronounced it as illegal and unconstitutional and gross violation of the rights of the Emir. This is what the court said in that case:

We call on the authorities, in particular the Inspector General of Police, the Director General of Department State Services and Attorney-General of the Federation and Minister of Justice to ensure the immediate release of HH Muhammadu Sanusi II so that he can be reunited with his family.

We are concerned about the personal safety and security of HH Muhammdu Sanusi II and wish to call on all well meaning Nigerians and the International Community to bring their influence to bear to ensure that HH Muhammadu Sanusi regains his liberty immediately and to guaranty his safety and security.

The legal team of HH are working both in Kano and Abuja and unless he is released immediately, we will be taking appropriate legal action.

Monarch Keeps Mum To Corrupt Tendency, For Fear Of Being Dethroned – Sanusi II