* Ganye Chiefdom where police is integrated, seen as a friend not a foe and is motivated with award of honour by the monarch; the Gangwari Ganye - Fred Oyono 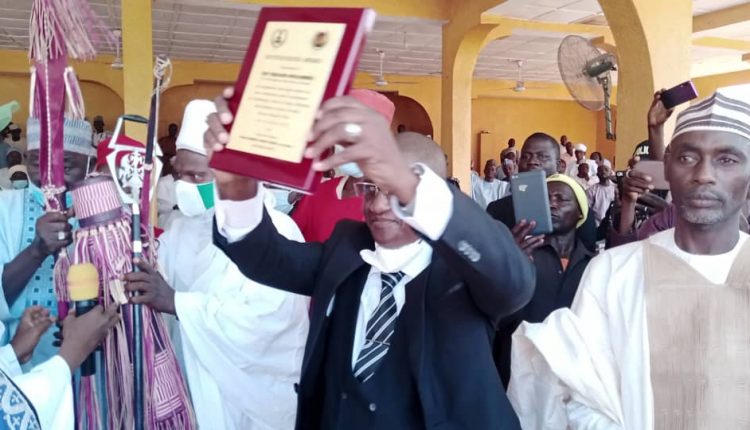 CSP Muhammad Ibrahim is an officer of many awards; He won CP Madaki’s Award in 2019, CP Adeyenju’s award in 2020 in addition to Gangwari Gabe’s award – Nguroje

The monarch has called on the Police Officers to emulate CSP Muhammad Ibrahim as they discharged their duties.

The recipient who felt motivated, thanked the monarch and the Ganye monarchy for recognising the services he has been rendering rather selflessly, which he said should be attributed to the support and encouragement he has been enjoying from the community and the Commissioner of Police; his boss.

The Commissioner of Police, Olugbenga Adeyanju has during the award ceremony, held at Gangwari Palace in Ganye, southern senatorial district of Adamawa state, northeast Nigeria, assured the monarch of more distinguished service delivery to the good people of Adamawa

“The Commissioner of police who reassured the citizens of his commitment to protecting lives and properties thanked the Royal Father, the Council Chairman and the good people of Ganye local government for identifying with the Officer as it is a moral booster.

“The CP was accompanied by Assistant Commissioner of Police in charge of Operations, ACP Shehu Umar Didango, Operational Commanders and other Senior police officers,” Nguroje reports

Speaking with the Periscope, Nguroje commended the officer where he said that CSP Muhammad Ibrahim was an officer of many awards; former commissioner of police, Audu Madaki honoured him with an excellent service award last year and this year, the present commissioner of police Olugbenga Adeyenju recognised him with award of effective and efficient service delivery, in addition to Gangwari Ganye’s award

It could be recalled that last year DPO Mohammed Yahaya Nuhu, DPO Ganye has received the Gangwari’s blessings where he was honoured with award of selfless, effective and efficient service delivery fearlessly in the face of banditry in kidnapping.

Fred Oyono, a strategic thinker articulated that Ganye is one Chiefdom where police is integrated, is considered as a friend not a foe and is motivated with award of honour by the monarch; the Gangwari Ganye on behalf of the Chiefdom.