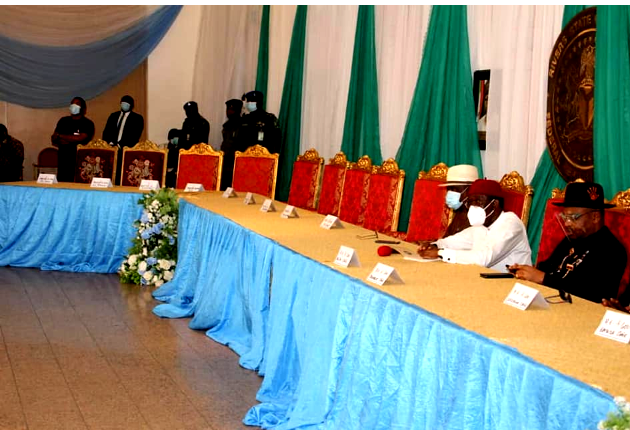 There was palpable anger at the banquet hall of the Rivers State Government House as a meeting called at the instance of the Presidency with the Governors, Traditional rulers, opinion leaders and youths of the South-South was botched by the absence of the Presidential team.

Representatives of traditional rulers, leaders from the six South-South states and all the Governors in the region who arrived Porth Harcourt on Monday the 16th for the meeting which was originally scheduled to commence by 11 am on Tuesday became infuriated when they were told by 3pm that the delegation from the Presidency which was to be led by the Chief of Staff to the President would no longer be available

The waiting South-South delegation were informed that the delegation from the Presidency, which was to also include the Inspector General of Police, the Director-General of the Department of State Security and eight Federal Ministers requested for the meeting to be rescheduled.

Although Governors of the South-South led by the Governor of Delta State, Governor Ifeanyi Okowa apologised to the people for the botched meeting and keeping them in Port Harcourt for two days, the Traditional rulers, youths and women maintained that the cancellation was an insult on the people of the region which would not be taken lightly.

They called for an unreserved public apology to be rendered to the leaders and people of the region as a precondition for any consideration for a reconvening of a meeting with the people of the South-South.