ADAMAWA: Kidnappers take to their heels to the hills, abandon, arms, ammunitions, amulets, others in Maiha 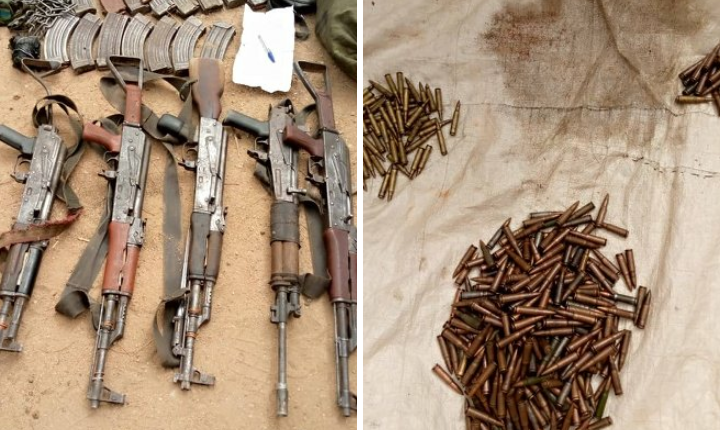 It appears that the international security meeting between Maiha local government, northern senatorial district of Adamawa state, northeast Nigeria and the border towns in Cameroon Republic, initiated by the Chairman, Maiha local government, Hon. Idi Ali Amin, against banditry, insurgency and kidnapping, which necessitated the formation of the joint security operatives, comprising of the security agencies, hunters and Fulani vigilante is yielding positive results.

It is not only that banditry and kidnappings have almost become history, but that the international bandits and kidnappers operating in Maiha local government have been neutralised by the joint security operations.

The joint security operatives have discovered different kidnapper dens in Ukda under Sourau district on 4th March, 2921 and in Jalingo-Bu village of Jalingo-Maiha district on 28th March, 2021.

The bandits and kidnappers were neutralised in a gun battle where they were subjected to being hunted. By means of withdrawal, they took to their heels up the hills, abandoning their arms, ammunitions and amulets among other incriminating evidences.

“The chase against criminal elements isn’t through until we have them all arrested and brought to book,” one of the Fulani vigilantes who was furious that the activity of the kidnappers was given the Fulbe a bad name like a dog to hang it, would say.

“The border towns in Cameroon Republic also have their security operations. Therefore, the criminals no longer have a safe heaven. They are left with a decision as to where they will want to be submit their guilt; Cameroon or Nigeria? A hunter would remark.

Commenting, the Chairman, Maiha local government, Hon. Idi Ali Amin commended the gallant efforts of the joint security operatives in chasing the suspected kidnappers, destroying their hideouts and recovering dangerous and sophisticated weapons with which they operated.

Idi said that the composite of international security meeting and the joint security operations, comprising of security agencies, the hunters and the Fulani vigilante produced positive security result.

The sophisticated weapons recovered from the kidnapper hideouts at the outskirt of Jalingo-Bu today and resolved to be deposited at the police headquarters in Yola with the hunter’s vehicle was said to have faced some hitches on the way.

The vehicle was stopped at Song local government. The situation was communicated to the military who intervened by escorting the vigilante vehicle with the weapons to Yola. The convoy was however said to be intercepted at Song by the divisional police officer.

It was resolved that the convoy should instead be redirected to the military barrack to avert creating unwarranted scene.

The Periscope investigate sought to confirm the development from the Adamawa State Police Command. The Police Public Relations Officer, DSP Sulaiman Yahaya Nguroje has in a telephone conversation said he was yet to receive the report of the development. He has however assured that the police command would as usual inform the public of any development when it got to the headquarters.