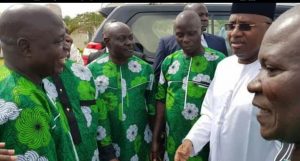 A Miangu school old boy who gave his name as Yohannah Dickson and charged to be authenticated without any change of name, of his essence from the school’s register, clained to have been governor Bindow’s WAEC mate, said he declined the Old Boys’ meeting at the behest of Bindow because the latter was withdrawn from the school by parents when they were in SS3.

“We’re not saying that governor Bindow has gone through the window and/or had no education.

“What we’re saying here is Bindow had not completed his studies with us. While we were in final year, his father withdrew him from the school because he would not want to have his son associated with the likes of us, he was pleased to call ‘arna’. Therefore, he did not sit for WAEC in Miangu with us.

“Bindow shouldn’t tell you that he had finished his school here. He only attended and left before completion

“That’s why when we’re invited at the behest of Bindow for a gathering of Old Boys, I asked why now after over 35 years?

“I equally posed the question I was not given the answer to have warranted honouring the invitation.

“Has Bindow really sat for final examination the WAEC with us or at all in Miangu to have claimed to be in fraternity with the Old Boys?” Dickson, whose memory wasn’t defective, daring Bindow, drew the conclusion with expostulation.

Was there any reply?

“Oh! Old boy Bindow could have been passed or borrowed the Miangu school testimonial through a deceptive window, as Mohammed Ismail would later articulate.

Meanwhile, Mohammed Ismail, who was by urgent conscience, urged not to have a forged story purged, articulated thus: 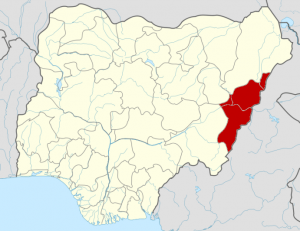 I cry for my beloved Adamawa state for been subjected to constant rape and abuse, while its people remain the most famished, courtesy of a government that seems not to care a hoot about the people’s concerns, feelings and prejudices.

It is apparent that governance has become a huge circus arena in Adamawa state where all sorts of stunts ranging from the absurd to the sublime are taking place, while the people have been forced to become mere onlookers of the banal fiction.

The governor has deemed it fit to abandon governance and relocate to Jos in a choreographed and stage managed move to distract the good people of Adamawa state away from the thrust of the weighty allegation of certificate forgery levelled against him, a topical issue that has been in the front burner for sometime in Adamawa state.

But the unfortunate PR stunt, like the badly arranged card that it was, has snapped and backfired as the people questioned the rationale behind the governor’s trip to Jos just to prove that he went to school via a kangaroo reunion, instead of showing his secondary school certificate which would have effectively nip the contention in the bud.

By doing that, the governor would have simply saved himself and the state from being subjected to further ridicule and odium and thereby shaming his traducers and detractors.

But in line with the saying that “one cannot give what he doesn’t have,” the governor has instead of towing the path of honour, only found it expedient to relocate to Miangu to pull all sorts of stunts, with the intent of deceiving or obfuscating the good people of Adamawa state and in the process making Adamawa state and its people a laughing stock before the nation that was held in awe for the audacity of the governor to reduce a substantive matter like certificate forgery to something akin to a child’s play.

By this token, executive folly and rascality assumed a new definition and taken to a new height in the annals of Nigeria’s malevolent leadership style, as for the first time, a sitting governor found it convenient to relocate from his exalted seat of power to a rustic town for days just to satisfy his whimsical proclivities.

More disturbing is the fact that considering the retinue of aides and political hangers on that the governor took to Jos, and the fact that he has to mobilise his so-called “class mates” to the stage managed event, a substantial amount of tax payers money must have exchanged hands in the process.

For a state that has thousands of children of school age not attending schools but roaming the streets, hawking sachet water or begging while a section of its workforce are in abject poverty over non payment of salaries, the action of the governor is to say the least, repugnant, reprehensible and unfortunate.

To any discerning analyst, the Miango tragedy has only helped to confirm for the umpteenth time that the governor did not have a secondary school certificate because instead of committing huge resources, and significant man hour to organize such a sham, it would have been easier and more honourable for the governor to gather the people of the state and show them his certificate.

Another thing, which the purveyors of the reunion forgot to factor in, was that, it is not necessary that a person that attended a secondary school must have a certificate, therefore, the narrative about Bindow’s attendance of a secondary school in Miangu was not even the issue in contention.

It is pertinent to state that a person who attended a secondary school could fail to have a certificate if he/she did not write a WAEC examination or if he/she scored F9 in all the subjects he/she sat for. From this, it can be deduced that Bindow did not either write the 1983 WAEC exam or has failed all the subjects he wrote.

Considering the penchant of politicians for a hired crowd, the Miango “convention” can pass out as another avenue where a rented crowd was used as usual, to do the bidding of the governor for PR convenience.

The same can be inferred about the questionable testimonial, which the governor used stealthily to earn for himself, the party’s ticket in the build up to the controversial party primaries in the state, which set the party on the path of perdition.

Any discerning observer could draw a parallel between the Miangu mishap and the testimonial of the governor, because while the Miangu gathering could be dismissed as a crowd of rented mercenaries, even an “uncertified” roadside computer graphic designer can come up with a better presentation of the testimonial that Bindow took to INEC. Meaning that the testimonial, which was allegedly given to Bindow more than 20 years after he finished secondary school, might have been itself forged, as no school worthy of its name, according to stakeholders, could have given a student testimonial more than 20 years after passing out.

The fact that the Miango charade was stage managed become poignantly clear when the principal of the school reportedly showered encomiums and plaudits on the governor who she described in superlatives terms.

Therefore, the principal has no right to talk about Bindow’s personality as a student because she could not have been the same l principal in the same school for more than 35 years, without also having been retired.

It is my humble opinion that even if the principal of the school during Bindow’s time is still alive, she would have retired from active service, a long time ago.

Therefore, it could rightly be surmised that the principal was also bought to regale the crowd with tales and fictions about a person she did not have any knowledge of educational standing.