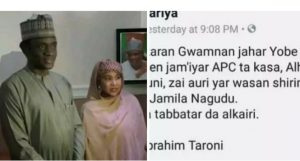 Rariya’s an example of desperation, sponsored blackmail and defamation of character – Media Aid

It was cautioned that the 2019 electioneering atmosphere should not be riddled by campaign of calumny or ridiculed by violence.

However, The pessimists who have already perceived their defeat going by the permutation, have since taken to hate speech and campaign of calumny, deploying the services of some media outfits with unethical tendency.

Hon. Mai Mala Buni the national secretary of the ruling party; the All Progressive Congress APC, was not only gunning for Yobe governorship, he was also running after, to jam Jamila Nagudu a Kannywood actress, even when Yobe state has not got a wood typical of the Kenny actress.

Rariya has on January 13, 2019, posted a piece via it’s Facebook wall, written by Ibrahim Taroni with an attached picture of Hon. Mai Mala Buni with Jamila Nagudu, insinuating that the duo were couples getting set for marriage.

Rariya is a Hausa publication that has its subject matter, for the most part, on issues about local film industry.

The Periscope Global Investigate, sought to find out the authenticity of the published rumour.

It is unlikely to trace the source from Rariya as it is unprofessional of a journalist to betray a whistle-blower as the source of information.

Could Yobe politics be reduced, in marital terms, to the absurd theatre of the actress, for whom every campaign logic that could attract the mandate of the electorates, should be deployed by the uncontestable and seeming undefeatable gubernatorial candidate to woo?

Haruna Yusuf a Publisher, media and publicity campaign expert deployed in the service by Mai Mala Buni, considered this as ridiculous, a fictional thriller.

“Rariya’s post is an example of desperation, sponsored blackmail and defamation of character against Hon. Mai Mala Buni.

“You See Dr. Dodo, the trending photo that went viral on social media, was actually taken during one of the courtesy visits paid by the kannywood actress Jamila Nagudu along with her colleagues. A public officer who’s a politician would not dare decline request for a picture snapshot. What would follow would have been disastrous,” Yusuf said.

Yusuf lamented that it was unfortunate, that people who ought to preach peace, unity and progress, were being used to cause dissension.

“As I said earlier, this could go for a sad example of a desperate opposition that we must discourage from planting a seed of discord to heat the polity as a nurtured policy.

“We cannot have a hired thug, putting up stories without crosschecking and without credible basis, against a public figure like the national secretary who serves as the astute manager of people, irrespective of tribe, religion, status, profession or political inclinations.

“Hon. Buni’s reputations precedes him in all ramifications with a political profile that speaks volume.

“Hon. Mai Mala Buni has and is always at the forefront, it is time to stop giving into cheap propaganda and blackmail and it is also time to stop following misleading political leaders. It is time to look at each other through the common thread of humanity disregarding all our religious and political differences and cultivate a habit that encourages cohesion, peaceful coexistence and harmonious relationship.

“Hon. Buni’s political background prepares the future for him, above all, his cultivated habit of patience tolerance and sense of unity. His charismatic style of all inclusive leadership and always with his ears to the ground endear him to the electorates.

“Believe you me, his doors are always opened for visitation courtesy calls and consultations.

“These however, should not be taken as a weakness. It shouldn’t also be taken advantage against, for character assassination,” Yusuf warned.

The family and friends of Hon. Buni, couldn’t conjure up the reason behind the libel.

“Is Rariya after breaking up the ever loving and united family of Hon. Buni or it is after denting his steady rising political profile and/or both?

“Neither the family and friends nor the electorates in Yobe, will be narcotised into defective memory, with such deceptive propaganda challenging credibility of morality in the personality of a family figure and friend.

“Mai Mala Buni, is indeed of decent birth with excused rather than accused character, for a sponsored assassination to hold any water.

“Hon. Buni belongs to the next level advocates, while campaign of calumny remains medieval for the renegades against peace, and prospect,” some members of Buni family and friends said.

“We also believe that this is part of the mischief intended to discredit Hon. Mai Mala Buni, as it emerges, it is the only viable alternative to the opposition candidates in Yobe state and the coming general elections.

“Hon. Mai Mala Buni’s mission is to accomplish Gov. Ibrahim Gaidam’s vision and his unfinished transformation agenda for the next level,” Yusuf said.