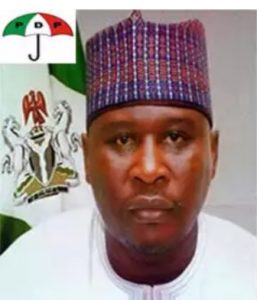 * The allied forces, like tsunami, will sweep away the broom – PDP stalwart

Countering the campaign of calumny, claimed to be callously crafted to crush Rt. Hon. Umaru Ahmadu Fintiri’s gubernatorial ambition and to demean the PDP with an evangelical Fulani and Muslim hate theology, trending in social media, no less than ten political parties with their gubernatorial candidates, stepped down in solidarity, solidifying the success of Fintiri’s struggle to Dougirei Hill to hoist a PDP flag slated for Saturday.

“Fintiri and Atiku are both Muslims who, while adhering to the dictates of their faith, equally by means of equality, recognise and respect the faith professed by other people.

“To say that they will mortgage the worshippers of and their faith for votes is to say the least, illogical… simply, implying that they are either ignorant or they are not conscious of their religion, which is untrue. It’s character assassinating.

“We thought that it’s medieval using religious hate propaganda to gain cheap popularity or political by anyone who’s not even sincerely religious.

“What is religious, is the equality, fairness and having the fear of God; as a leader, one should not be found to be a liar or a betrayer of public trust,” a PDP chieftain chipped in.

It was a politically boosting occasion to garner courage and strength to unseat a sitting governor with a hurricane poll Saturday.

While speaking at the occasion in Yola, Fintiri who expressed delight over the decision of the 10 governorship candidates, said that the seeming murky coast, was a new development, taking positive dimension, cleared for PDP to win the governorship election, considering the popularity of the parties and the candidates with their teeming supporters that have decided to join his campaign for a formidable team in the state to restore populist kind of participatory, emancipatory democracy.

Fintiri assured that his would be a government would be reflective of state character, pointing out that anyone that has positive plans and incisive initiatives, with a view to moving the state forward, would be given an open and ample opportunity to contribute his quota to the development of the state.

Fintiri stated that workers and students welfare, would form the cardinal points of his administration, noting that there is no government that could bring development without active involvement of civil servants, whom he said, are the engine room and the driving force for policy implementations.

When you kill a civil service, you kill a state. A civil service is killed when civil servants, are subjected to living a famished life, in squalor, striking poverty and starvation, having been denied salaries to be accumulated for some months without reason. A highest point of leadership insensitivity, insecurity and inefficiency.

Fintiri reaffirmed that the possible and effective way to move the ailing Adamawa state forward, would be to entrust power, leadership and authority to PDP, lamenting that since his party left office in 2015, there was no durable project being undertaken by the government of the ruling All Progressive Congress ( APC) that has direct bearing on the lives of Adamawa people.

Fintiri thanked and commended the electorates in Adamawa state for a positive outing; voting for PDP to win the presidential, capture two of the three senatorial zones, with some house of representatives in the state during last elections.

The 10 stepped down for Fintiri governorship candidates who spoke at the occasion, said that their decision was taken in the interest of the people, noting that the only way to rescue power from Bindow led government, was to join forces with Fintiri, for having similar manifestos and shared approaches.

Mrs. Lami Musa, the governorship candidate of People’s Party of Nigeria ( PPN) said that they have to make sacrifices by putting aside their personal interests and work for the interest of the state.

”Fintiri is the best governorship candidate that has the capacity to restore the lost glory of Adamawa state. Whoever wants the state to move forward, will have no choice than to vote Fintiri.

“That is why we join hands with him to retire inefficient leadership and restore public confidence in governance in Adamawa state,” she stated; silently signing as signifying a salient slogan of smiley Lami; “sweep away the broom”.

In a related development, some chieftains of APC and members in Mubi north and Mubi south, Governor Mohammadu Umaru Jibrilla Bindow’s home town, have decamped to PDP and vowed to defeat Bindow, starting from his polling unit.

Speaking to journalists during the ceremony in Mubi-north local government area at the weekend, the leader of the decamped chieftains Alhaji Sajoh Gella, lamented that the failure of APC government under Bindow’s leadership, was one of the major reasons for him and other members to defect to PDP.

Gella said that their decision was taken to rescue the state from the claws of clueless governance and divisible policies he alleged, the Bindow led administration has introduced to divide the people along religious and ethnic lines, typical of mutual suspicion and antagonistic relation inherent in, as spelt out about the dark aged Arabia.

Gella a former member of Adamawa state House of Assembly and former commissioner of water resource under Murtala Nyako’s government, said that the desire of his members who were over 45,000 cut across Maiha, Mubi-north and Mubi-south local government areas, was to deliver the three councils to PDP.

Gella assured the PDP governorship candidate Rt. Hon. Ahmadu Umaru Fintiri, that APC would be buried, never to be exhumed, during the Saturday polls, pointing out that Bindow has failed his people woefully and that the people were well prepared, PVC armed, franchise battle ready to recall the governor home, through the ballot boxes.

Gella stated that all the senior APC stakeholders in the three local government areas, have agreed to work for Fintiri, based on his 3 months old track record as acting governor, which according to him, were more productive than Bindow’s four years.

Gella has garnered the courage to call on other members of APC to vote for the governorship candidate of PDP, pointing out that politics of ethnicity with bitterness, would not bring dividend of democracy to the people. Mandating a leader based on merit, would be the better means of development.

The Vito Ferari like an ear to the ground eavesdropper in Mubi, revealed to the Periscope Global Investigate that having been certified Atikulated, Sajoh Gella was engaged by Atiku to articulately fine tune Mubi north/south and Maiha for Fintiri’s victory, Saturday.

Receiving the decamped APC chieftains, Fintiri promised that when elected, his government would be for the people and not the type manipulated by cabal from among the selected sections of the state.

Fintiri who was sandwiched between top PDP members, challenged the electorates to judge him based on his performances during his three months old tenure as acting governor, to have their pragmatic and unadulterated, rather than programmed opinion about his capacity and capability of restoring public confidence in governance that was shattered, tattered and battered by leadership that betrayed its citizens and bartered the state with clueleness.