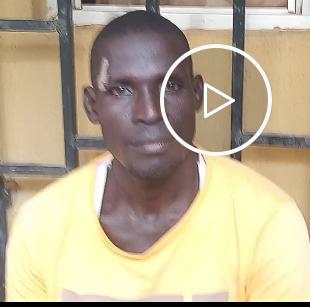 Speaking to the Periscope reporter, Umar revealed that his niece was 16 years old and not 12 as was widely reported, though still a minor. She was raped three times by her teacher called Nathan Yusuf who got her pregnant.

“He drugged her eveytime he raped her. She was so ashamed, scared and traumatised to expose her rapist, until she was found to be pregnant.” Umar said.

Nathan’s victim was his pupil at Namtari primary school. He continued as her coaching class teacher on getting to the junior secondary school.

Having earlier confessed to have committed the crime. The rapist’s relatives requested for settlement out of court. The survivor’s parents could not be hoodwinked to the bait on the ground that the teacher has been a serial rapist.

The teacher was said to have earlier raped two minors; one was impregnated but the settlement for cover-up resulted in aborting the pregnancy. Any settlement outside of court could lead to further rape. The family would have thought.

The men of Civil Defence Corps did the arrest and the rapist was arraigned. At the first hearing, the rapist lawyer was said to have requested bail for his client. However, rape case was unbailable.

The hearing was adjourned to Tuesday September, 24, 2019.

Rodney Nathan the Chairman National Union of Teachers NUT Adamawa State, was reported to have denied that a teacher raped and impregnated a minor, claiming that the pregnancy was as a result of love affair between a teacher and his student, where the student’s parents were in the know about the relationship.

Nathan the NUT chairman revealed to TG news online that Nathan the heart-throb not rapist, was betrayed to the security officials for arrest as a blackmail, perhaps owing to either he did not share the same faith and/or tribe with his 16 years old lover

However, in an agressive press statement issued by Comrade Wakil Kyari the secretary NUT, Adamawa State, denied the views credited to their chairman, claiming that he was misinterpreted.

“The reporter (Tom Garba) misinterpreted the interview, which was granted on the subject matter as he acted out of desperation and lack of journalistic approach in portraying the real message.

“NUT as a responsible Union will not and would never encourage such unholy relationship though the said teacher is at his own liberty to private life.

“That, the said reporter should have known that children are trust to teachers and a responsible teacher should not perpetrate such act considering the ehics of the profession.

“That the NUT would never interfere in any investigation by security agencies, talkless of describing the process as premature as purportedly carried by the reporter.

“That the reporter should shun away from such kind of yellow-journalism by always reporting factual issues to avoid litigation,” NUT said.

However, the North East Online Network NEON for which Tom Garba belonged, stood by its member.

“It’s not a misinterpretation out of desperation and/or yellow journalism. It’s a reportage with accuracy for which kudos should in ovation, be credited to Tom Garba and TG news online.

“It is the teacher(s) no the reporter who should be made to know that pupils and students are trust to teachers who should be responsible in both teaching and character, not to violate the ehics of the profession and children under their care, by betraying the parents and the state.

The activities of the The Adamawa Coalition Against Rape, which comprised of the Civil Society Organisation, the Faith Based Organisation and the media, is becoming a threat to rapists and those conspiring to shield rape cases.

NUT might have realised the comments made by their chairman a traditional title holder, as being disrespecful to the community and has lacked the ingenuity to retract it with conscientous courtesy,” Dr. Adamu Muhammad Dodo the interim chairman, NEON in a press statement remarked.