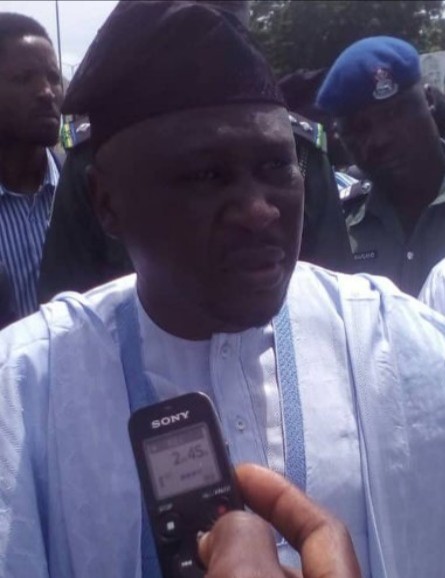 The coalition of the now running into seven months unpaid workers, waited in vain to be responded to, by the Adamawa state governor, based on the promise made to them by a delegation led by the deputy governor, after presenting a peaceful protest letter, demanding for their reinstatements into state civil service and full payments of their six months salaries.

Governor Ahmadu Umaru Fintiri, they were informed, have been away. He was a listening governor, they were told, he would respond to them accordingly on arrival.

The governor has returned. However, contrary to the promise, some members in the coalition conceived as a mere political rigmarole, Fintiri, they have gathered, was yet to even aknowledge receipt of the peace protest letter, because it was yet to be forwarded to him from the office of the SSG.

How authentic is the information. The question was not the concern of the aggrieved to respond.

Some members of the coalition conceived sabotage nurtured by the SSG who they never would have liked to have joined in the government delegation for dialogue when the head of service, the chief of staff and the deputy governor would have sufficed.

Why was the SSG witholding official communication far so long? The insinuations bred the expostulation without requiring any reply, cushioning the frustration.

“Engnr Bashir Ahmad the Adamawa state SSG should know that there’re marks of difference between human beings and machines.

“He should know that it was just an opportunity rather than his merit that gives him the office because he can’t win even the councillor seat in his ward.

“People have been complaining of the SSG’s uncompromising arrogance, the likes he extended when our delegate went for a dialogue. In fact, It was from his office and utterances we gathered that we’re considered as sacked rather than suspended government staff who would not be paid a faden out of our salaries.

“We’re told that secret employments are currently ongoing in the state, with a view to having us technically sobtituted. Whether or not it’s true, we must challenge the injustice,” a member of the coalition said.

There was the rumour that went round that in his court victory speech, when he returned to Yola, Fintiri said he would release four months out of the six months salaries of the suspended workers.

Speaking to the Periscope reporter, Faisal Baba the lead convenor of the apparently suspended workers said, it stood as a rumour because to this day, Fintiri has not uttered a word about the suspended workers’ unpaid salaries.

Some coalition members lamented that sports, especially football and footballers, are valued more in the Fintiri led government than the government workers.

“We held a peaceful protest rally long before the footballers who perceived were being shortchanged could get to organise their own. While we are ignored, the governor himself was the person that addressed the protesting footballers, assuring them that their agitation would be looked into, with alacrity,” a member of the Coalition said.

Faisal Baba said that having been pressured by the coalition members, they have to find out when the governor would attend to their demands.

“We were being told that governor Fintiri would tackle our issue this week, ending on Friday.

“Today is Friday and we assumed that the governor has indeed spoken. There are two kinds of communications that feature prominently you know; the spoken and that of action

“Fintiri’s silence is by any means communication. Therefore, he has spoken. We are yet to conjure up the communication in his silence that can’t however be redundantly none said.

“The spoken in action silence, can only be decoded with the payment of salaries of the month of October; whether or not we’re going to be factored in,” Faisal said.

Faisal lamented that even though, the Fintiri led government has declared free education, their children could not go to school because they could not raise N600 charged on every student; N300 for sport dues, even when one’s child has not cherished a hubby in sports and N300 for PTA levy that were tagged as window of exploitation.

Faisal lamented that some of their family members and friends who were not affected by the politically motivated suspension from the state civil service, could not afford coming to their aid with the peanuts collected as salaries; Fintiri is yet to implement the N30, 000 as minimum wage he initially promised to implement.

“The Adamawa State House of Assembly has received our letter of peaceful protest begging for their intervention earlier than other correspondents. The Hon House, it is observed, has deliberated on some issues, oubr demand is yet to reach for their hearing. We’re patiently waiting,” Faisal said.

Faisal said that they have another line of action in the event that they were not to be reengaged and have their outstanding salaries fully paid this October ending.

On the accusation that their agitation was equally motivated by politics as it was alleged to be sponsored by opposition party. Faisal said this was nothing other than “Fantastic, ostensibly, absolute, absurd nonesense.

“You mean we are not matured enough, we don’t have the independent thought to be able to think what is good for ourselves?

Our members are dying daily, we’re starving, were tasty, we can’t send our children to school and can’t afford to foot the hospital bills. Should we cocoon ourselves in the conspiracy of silence? Must someone or a party has to sponsor us to speak out?” Faisal queried.