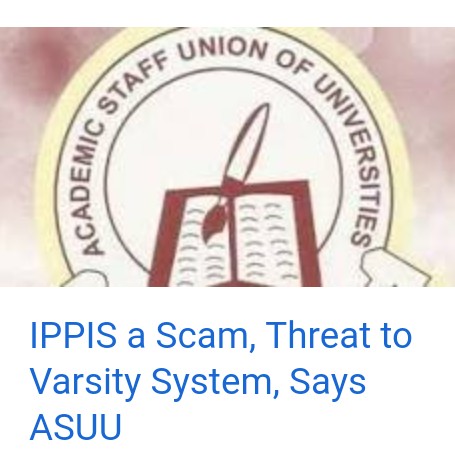 There have been floodgate of reactions, which suggest that ASUU’s threatening strike, should the federal government insists on implementing IPPIS across the universities in the country, is not popular with the critical thinkers and university Don’s even in diaspora. Prof Moses Ochonu A Nigerian scholar in Diaspora, condemns the threat as unscholarly, describes ASUU as Tyrannical bunch

Let us try to reason with ASUU, no matter how moronic and crassly selfish their reasons are for opposing the IPPIS biometric salary payment system, which has already been implemented across the federal government to streamline and bring transparency to federal workers’ salary payments.

The president of the union, Prof. Biodun Ogunyemi, listed the following reasons for why they would go on strike if IPPIS is implemented for university lecturers:

First, according to media reports, he described IPPIS as a scam while visiting Senate President, Ahmed Lawan.

Who is it meant to scam when in fact it is designed, at least in theory, to stop a long-running scam in federal salary payments?

Expecting precision, specifics, and introspection from ASUU is like expecting water to come out of a stone. No wonder, most ASUU members are such poor teachers who cannot communicate.

Second, Ogunyemi “said forcing ASUU members into the system would destroy the education system in the country.”

This is another drivel. How will a measure designed to weed out ghost workers and ensure that salaries and allowances are paid only to those who deserve and worked for them “destroy the education system”?

What does this vague and extremely broad phrase even mean? How will transparency–or the quest for it–destroy the education system?

At any rate, is the education system not already comatose and on the verge of implosion/destruction?

Even if IPPIS is all that the dishonest ASUU folks say it is, how can it destroy a system that has already been destroyed by the same ASUU members?

Third, he said “forcing the university lecturers to get captured in the payroll system would take away the powers of the governing councils of the various universities.”

Has ASUU considered the fact that, as funders of federal universities, the FG can implement any salary mechanism it deems necessary as long as it implements it across all agencies and institutions of the FG?

If university autonomy is a fetish that ASUU wants to worship and invoke to protect their impunity, how about demanding that universities become truly autonomous and self-funding entities?

Finally, Ogunyemi said “the system would automatically discourage the lecturers from performing at optimal levels because they would be shortchanged with the system.”

This is nonsensical. How? How the heck would IPPIS shortchange lecturers when it is designed to make sure that what is due them is paid to them and not to anyone else?

How will IPPIS “discourage lecturers from performing at optimal levels”–whatever that means? Are lecturers congenitally opposed to transparency?

Unless lecturers are fraudulent and dubious people, by what logic would transparency be a disincentive to “optimal performance”?

By the way, in the absence of IPPIS, are lecturers presently “performing at optimal levels”?

I hope the FG sticks to its guns and for once calls the bluff of these selfish thugs, blackmailers, and hostage takers.

Maybe that will force ASUU to level with Nigerians about the real reasons they are opposed to IPPIS.

Maybe they will then tell the truth, which is that most of them teach in multiple universities (some of them up to seven) and are on the payroll of all of them, which, by the way, is why they are unproductive researchers and terrible teachers.

IPPIS is their enemy because it will expose their promiscuous moonlighting, and their selfish hustle, which shortchanges students at all the institutions they teach.

IPPIS will make it impossible for them to hold all those appointments. They will be forced to give up some of them as the biometric system will detect their multiple appearances on multiple university payrolls.