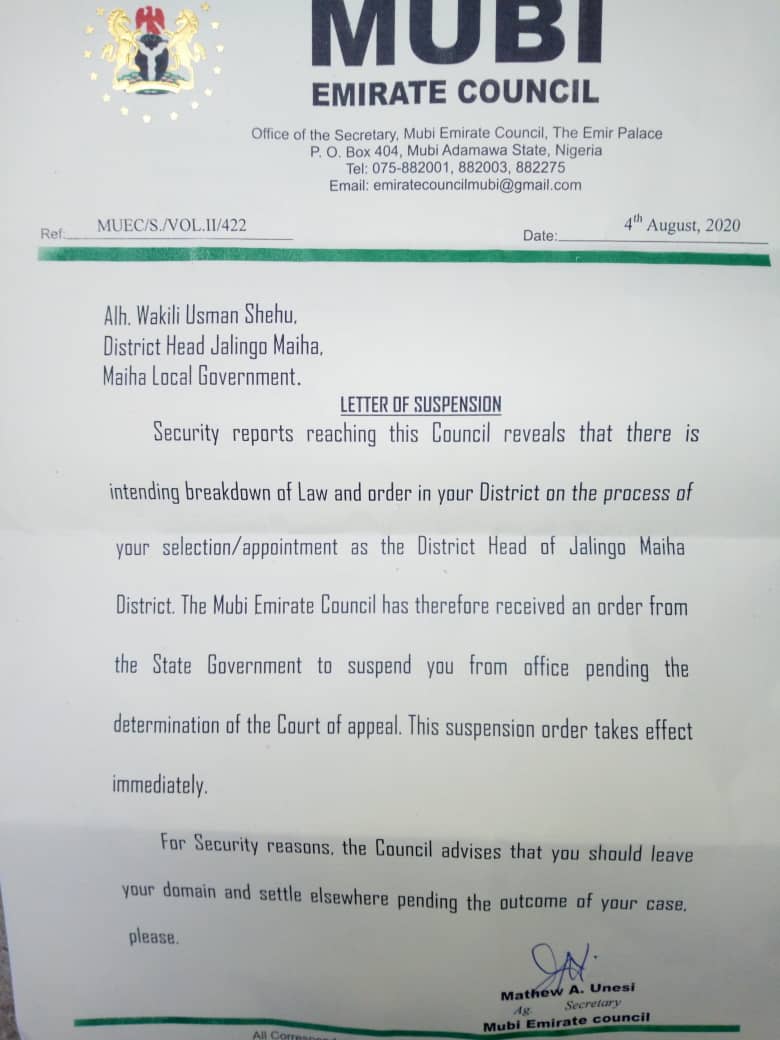 The state government, following security reports of the impostor’s activities (contempt of court); setting a time bomb of anarchy, waiting to explode as reported by, has directed the Mubi Emirate Council to suspend Idi and that he should stay away from Maiha.

The suspension letter dated Tuesday, August 4, 2020 signed by the then acting secretary of the Council, read thus:

“Security reports reaching this Council reveals that there is intending breakdown of law and order in your district on the process of your selection/appointment as the District Head of Jalingo-Maiha District.

“The Mubi Emirate Council has therefore received an order from the State Government to suspend you from office pending the determination of the Court of Appeal.

“For security reasons, the Council advises that you should leave your domain and settle elsewhere pending the outcome of your case, please”.

However, a source close to the Emirate Council, on condition of anonymity, disclosed to the Periscope that the acting secretary has mischievously twisted the directive of the Council.

“Alh. Usman Shehu Idi isn’t a district head over two years ago. Therefore, the suspension is based on the court order as honoured not based on selection/appointment of Idi, as arbitrarily misquoted by Unesi, who is now no longer serving as secretary with the appointment of objective minded and administratively well experienced Secretary of the Council.

The content of the letter would have reflected the directive of the Council, if the newly appointed secretary should have written it,” the source said.

Recall that Idi Usman Shehu was on 13 July, 2018, restrained by court order from parading himself as district head of Jalingo-Maiha. The previous government would not also honour the court order to approve the appointment of Barr. Suleiman Abubakar Mahmud.

Idi has also flouted the executive order that has earlier suspended him from parading himself as district, pending the determination of the appeal court.

Barr. Mahmud is a heir to the late district head of Jalingo-Maiha, Alh. Abubakar Suleiman the Ubandoma Mubi, whose noble lineage has been ruling over Maiha since 1808.

Idi Usman Shehu is a nephew to a village head, whose father worked for the late district head of Jalingo-Maiha as “Wakili” crudely interpreted to mean either the agent, or representative.