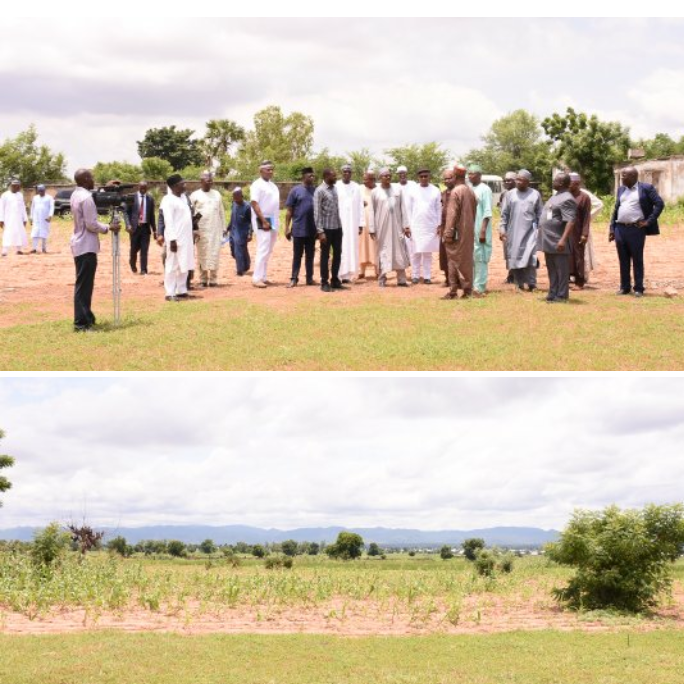 The committee on the establishment of Medical College of Modibbo Adama University of Technology, MAUTECH Yola, led by the Vice Chancellor, Professor Abdullahi Liman Tukur, the management of Federal Medical Centre, FMC Yola, led by the Medical Director Professor Auwal Muhammad Abubakar and the representative of the Adamawa state government, led by the Honourable Commissioner, Ministry of Land and Survey, Alh. Ibrahim Mijinyawa Yayaji being assisted by the State Surveyor General Mr. Pwavidon Simon Tuesday, visited the site ceded by State Government for the establishment of Medical College in Yola.

Adamawa State Government has donated part of the Government Technical College Yola for expansion of FMC Yola, preparing for upgrading to a teaching hospital and the establishment of Medical College of the MAUTECH that is soon to be converted to a conventional university to be able to add other sciences and humanity to the technology courses.

MAUTECH has on February 27 this year, received an approval letter from the National University Commission, NUC for the “approval of the establishment of full time mode of Medicine and Surgery (MBBS) undergraduate programme to be run in the main campus of the university with effect from the 2020/2921 academic session”.

Recall that the NUC inspection committee has presented her findings, before the National Assembly, with the recommendation that FMC Yola has the capacity for upgrading to a teaching hospital and that MAUTECH Yola is covered by the law that established it to run Medical College in addition to the recommendation for the conversion of the technology based institution to a conventional university.

Both the upper and the lower houses of the National Assembly have passed the resolution for the conversion of MAUTECH to a conventional university currently said to be waiting for presidential assent.

But for the ASUU strike and the Covid-19 challenges, MAUTECH would have by now offered admission for MBBS. However, since she is resuming to continue her first semester, it is hoped that the programme will begin from next year.

Speaking with the Periscope Reporter, the State Surveyor General, Mr. Pwavidon Simon revealed that the purpose of visiting the site donated by the state government, was in the interim, to carve out an area of minimum of four hectares in the interest of both the MAUTECH and FMC Yola for the Medical College to secure certificate of occupancy with a view to providing basis for the purpose of engineering design to be able to facilitate siting.

The list of the MAUTECH committee for the establishment of Medical College is given as follows: