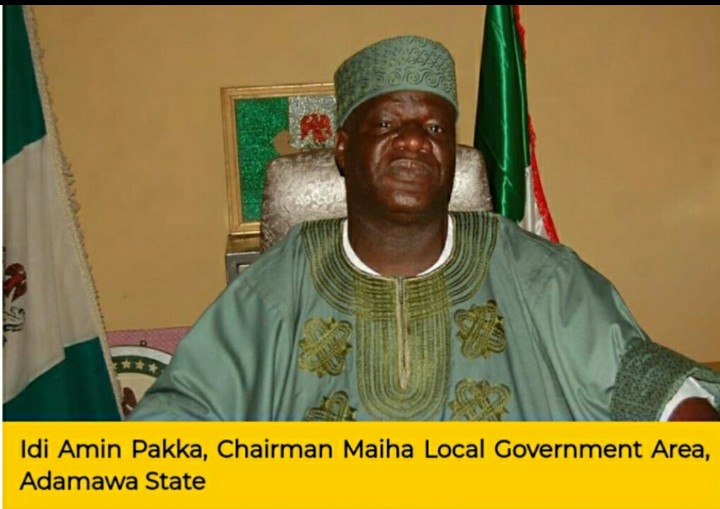 * Hoodlums and nonentities who feed on promoting looting with hate speech against the government occupy the state, Rumbun Adamawa says

Dr Idi Ali Amin Pakka is the Hon. Chairman Maiha local government, northern senatorial district, northeast Nigeria, who recently joined the rank and file of strategic thinking and effective and efficient leaders having the spirit of diplomacy, a skill drilled by the Institute of Business Diplomacy and Financial Management, has his take on the hoodlums who vandalised and looted public and private properties in the state capital, where he argued that Adamawa APC’s accusative commiseration over vandalisation and looting of public and private properties by hoodlums in the state capital, shaming the peaceful heritage was rather ridiculous, aimed at gaining cheap popularity.

“Hoodlums not only looted, they vandalised public and private properties in the state capital, the monstrous act is not seen by the opposition as trespassing and near insurgency breeding anarchy, it is the executive order aimed at recovering looted properties that is interpreted as a move to infringe on the privacy and right of the citizens;

“Besides, to show a disapproval of the house-to-house search executive order that has since been suspended following the compliance with the executive call to return the looted properties by the coordinated multiple gangs of hoodlums is rather an exercise in futility, a medicine after death; what hypocrisy? Rumbun Adamawa expostulated.

Below is the summary of his response to the Periscope Reporter, making the mood of the moment

* We wage war against rape, kidnapping and banditry, we didn’t realise that there are the ‘Yan Shilla shielding in sheaths of conspiracy around us, not until the hoodlums living with us exposed themselves by their monstrous looting

* But for the fear of God, the governor could decide to personalise public funds and nothing can happen, he instead decides to invest on developmental projects fir progress

* Housing units, building of cottage hospitals in places previously ignored since the creation of the state, schools’ rehabilitation, investment in raw materials, employment, youth empowerment, flyovers, roads rehabilitation and construction, restoration of peace, law and order, effective and efficient leadership, you can name it, are the credits that the sponsored hoodlums do not want Fintiri led government to earn

* Nakura is simply a political brigand whose source of income lies in attacking, accusing those in authority; he accused HE the former Vice President, the Waziri Adamawa, Atiku Abubakar, former governors Boni Haruna, Admiral Murtala Hammanyero Nyako, Baba Maimangoro and even Bindow before he could serve as a kitchen cabinet member

* Nakura alleged that no palliative was ever shared in the state. It is the responsibility of the media outfit to find out whether or not palliatives were ever distributed across the 21 LGAs of the state through the Councils’ Chairmen before disseminating the somewhat politically motivated venomous dissension script to Nakura to act rather antagonistically

* Media as an agency is a stakeholder in managing crisis, the agents; i.e. media managers shouldn’t be engaged in what heats the polity during crisis as in present situation

* Gentlemen of the press should be fair, balanced and objective, taking to investigative, human angle and developmental journalism; disseminating what unites than the dissension capable of disintegrates the entity

Like in all Eid days, Idi Ali Amin would answer Ameen to the prayers for peace, unity, progress and development of Maiha local government being the Council’s Chairman, the state and the country as a whole.

Little Idi did know that apart from the kidnappers and bandits operating across the state and along Nigeria and Cameroon border, which necessitated for the international peace and security meeting he initiated and hosted some months previously; a strategic thinking that produced diplomatic result in addressing kidnappings that have suffocated some districts of Maiha local government after the devastating effects of the Boko Haram insurgency in the northern senatorial district of the state, there there were dens of hoodlums in the state who would want to reduce Adamawa state into a republic of looters.

“You can imagine being sandwiched between buildings that house hoodlums as your neighbours without knowing, not until executive threat with diplomacy was sent to vandals to return the looted properties or have their homes pulled down or certificate of occupancy withdrawn.

“Hoodlums do not want to have their homes demolished, yet they, in their savagery, monstrously vandalised and looted public and private properties they could lay their thieving axe. Can you imagine?” Idi lamented

Idi would not want to believe that those hoodlums with the intent to reduce the state to republic of looters were entirely indegene of Adamawa state who are known for peace, love and mutual coexistence.

“There were #EndSARS protests in some states in the north but there is hardly any state vandalised and looted public and private properties other than Adamawa state, Yet some unpatriotic citizens, who manipulated airtime in some media outfits, rather than remain sober, justified the looting, impliedly gingering the hoodlums against being remorseful for their monstrosity.

“The hoodlums have indeed taken us some steps backward. There must be a call for a societal reorientation, if we can’t have at the doorstep of every district a register to be recording and shaming the ugly and the bad while glorifying the good conducts separately for posterity,” Idi opined.