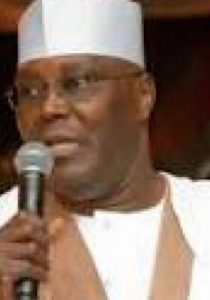 Operatives of the Economic and Financial Crimes Commission (EFCC) have raided the building housing the apartments of the two sons of the presidential candidate of the People’s Democratic Party (PDP), Atiku Abubakar.

The raid on Aliyu and Mustapha was carried out Saturday in highbrow Maitama area, Abuja, Premium Times reported Monday.

The newspaper reported that though its sources said the home of Mr Abubakar’s children was the primary target, an anti-graft spokesperson suggested Chiemeka might have been the target.

Atiku’s spokesperson, Paul Ibe, confirmed the search to Premium Times Sunday, saying the officers who conducted the “grievous act of intimidation” were “unable to find anything implicating.”

Neither Aliyu nor Mustapha was in town when the anti-graft agents arrived. They are reportedly said to be studying for master’s degrees at foreign universities.

The EFCC operatives arrested those around and some of their properties confiscated, sources said.

Chiemeka was said to have been taken to the EFCC office in Abuja alongside his brother, and two vehicles confiscated from them.

“When the EFCC officers arrived on Saturday, they met Theodore Orji’s sons at home, because they both live in the same building,” a source said.

“They asked to see the apartment of Aliyu and Mustapha Atiku-Abubakar but Theodore Orji’s sons refused to show them, saying their friends are out of the country, anyway.”

“The EFCC operatives then said they have intelligence that a large cache of dollars had been kept in the apartment which they had come to recover,” the source said. “They forcibly searched the apartment, but there was no hard currency or anything that could be construed as fraudulently damning.”

Our sources said Chiemeka and his brother were released soon after they were questioned at the EFCC office, but two cars belonging to them were still in possession of the anti-graft agency as of Monday morning.

Chiemeka could not be reached for comments, with his telephone line refusing to connect after multiple dials. Aliyu Atiku-Abubakar also did not immediately return messages seeking comments.

A spokesperson for the EFCC, Toni Orilade, said he has no immediate knowledge of the operation, but expressed strong doubts that Mr Abubakar’s son’s home could be raided.

Mr Ibe, however, said Atiku Abubakar is destined to win the 2019 presidential election, and Nigerians are set to ensure that destiny holds by voting for him en masse,” Mr Ibe said. “The actors in Buhari’s government have now realised this possibility and are gripped by the fears of Atiku Abubakar.

“This grievous act of intimidation now has an expiry date that is dwindling faster than a twinkle.”