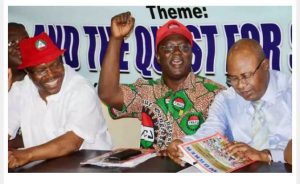 The Nigerian Labour Congress said it would embark on nationwide strike at the expiration of its ultimatum on December 31, 2018.

The labour had issued the ultimatum in Lagos to persuade the government in fast-tracking the process of a new minimum wage by submitting the executive bill to the National Assembly.

General Secretary of the Nigeria Labour Congress, Peter Ozo-Eson, told journalists, Monday that the position of NLC, TUC, and ULC at the Lagos press conference was clear, as it condemned the proposed setting up of a high-powered technical committee after a tripartite committee had completed its assignment with recommendations to President Muhammadu Buhari.

Ozo-Eson said that with the expiration of the ultimatum on Monday, labour would immediately begin mobilization towards a nationwide protest to shut down the economy from January 8, 2019.