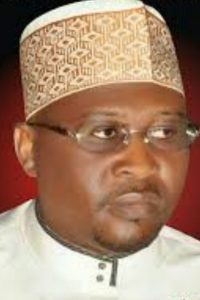 The Gubernatorial candidate of the major opposition political party the Peoples Democratic Party (PDP), Hon. Ahmadu Umaru Fintiri has dismissed the recent rallies of APC especially, the gubernatorial campaign flag-off of Governor Muhammadu Umaru Jibirilla Bindow as more of assemblage of entertainers from Kano State than a political gathering in Adamawa state.

The Gubernatorial hopeful during a session with Newsmen in Yola, noted that that it is evident that APC has lost relevance in the state and has lost out with Adamawa electorates forcing it to go to Kano and elsewhere to shop for entertainers to populate the campaign arena at the expense of taxpayers money.

Fintiri regretted that for almost three days, leading to the campaign, the state was virtually taken over by all manner of entertainers from Kano as dozens of them trooped to the State to enjoy manna from heaven at a time an overwhelming majority of residents was facing difficulty in feeding their families.

Fintiri noted that such gory situation was why the good people of the state deserted the campaign venue making even the National Chairman of the party to be embarrassed and resorted to contradictions to try to explain away the reasons for the poor turn out during the campaign flag-off.

Fintiri added that if despite mobilizing hundreds of millions of Adamawa tax money to ensure the success of the event, the campaign flag-off was such a huge failure, then governor Bindow should start packing his baggages from the government house as Adamawa people have eloquently spoken with their actions.

Fintiri noted that to underscore the desperation of Bindow at deceit and to conceal his unpopularity, the governor resorted to the use of political mercenaries who lie to the good people that some gubernatorial candidates have dropped from the race in support of the governor’s ambition during the failed political gathering.

“It is common knowledge that a house built on a pack of lies cannot endure. That is why those candidates that were named to have backed Bindow are coming one after the order to disclaim their involvement. That in itself is all what we need to understand that the government is on the verge of being swept away by its sordid performance, which pitted it against the good people of the state as you can see everybody is running away from the governor despite his magnanimity with the state resources.

“If the majority of the APC top brass including those that were recently appointed by President Buhari are running away from the gubernatorial candidate, you should know that all is not well. It is not surprising that the governor has to go cap in hand to beg actors from Kano to do the campaign for him knowing that Adamawa people will never hoist another era of misrule in the state,” he said.

Fintiri said such informed the poor turn out of people to the zonal rallies, which is indicative of their readiness to vote out the government for its wanton deceit and economic sleaze