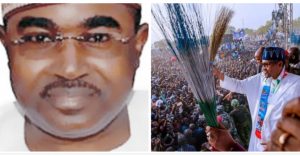 Security operatives attached to President Muhammadu Buhari, Thursday prevented some aggrieved youths the Bindow loyalist, from attacking Buba Marwa the former military administrator of Lagos state, at the presidential rally of the All progressives Congress (APC) in Yola, Adamawa state.

The disenchanted youth were charged to discharge their venom by what they considered as Marwa’s vituperation that could go for public disgrace before the president.

Marwa, who addressed the rally in Hausa, was accused, by the youths, of making unpleasant comments about governor Bindow of Adamawa state.

APC is considered to be having two factions in Adamawa state. The governor Bindow group and the Mahmud Halilu Modi and Malam Nuhu Ribadu group.

Marwa the ex-military administrator was with Modi/Ribadu faction that challenged the credibility of the APC governorship primary election, which secured the governorship ticket to governor Bindow as much as the faction would want the jury to adjudicate on whether or not Bindow presented a forged secondary school certificate; WAEC to INEC

Buhari was said to have pacified the angry youth and directed security operatives to whisk Marwa away from Ribadu Square, Yola, venue of the rally.

Marwa, Monday led former military generals to Aso Rock to endorse Buhari for continuity to the next level.

Marwa heads the presidential advisory committee on the elimination of drug abuse in the country. The youth who threatened mob action against him could be among those under the influence of what his committee was charged to eliminate to get lunacy out of the system.

Marwa is quoted to have said that had President Muhammadu Buhari failed in his duties, the generals would not have endorsed him.

“As an officer and a gentleman, Buhari’s word is his bond. After winning the elections, he brought out simple three-points programme – security, economy and fighting corruption.

“Buhari led the fight and is leading the fight by personal example. That is the height of leadership. Do as as I do not as I say. He has demonstrated that,” Marwa said.

Asked if the endorsement of President Muhammadu Buhari to the next level by the generals was not out of fear, Marwa’s answere was “Absolutely not.”

Recall that Buba Marwa the ex-military was once presidential aspirant he alsi contested for governorship in Adamawa state more than once.

However, groups of youths from the northern senatorial zone of the state where both Marwa and Bindow hailed from, expressed their disappointment with the development they considered as unfortunate.

“The N1000 each paid youths for political thuggery would be playing with fire humiliating a general who is known for humility.

“What impact has their so-called hypocritical principal made in their lives?

“It is well known that as part of his community service as a social responsibility, General Buba Marwa has had envelopes for scholarship, which he offered to the undergraduate students from the five local government areas that constituted the northern senatorial zone of the state; Michika, Madagali, Mubi south, Mubi north and Maiha LGAs.

“Marwa had equally had the empowerment schemes for the women and the unemployed youths.

“Tell me what initiative, at least youth centred that Bindow introduced as his community service as a corporate social responsibility. None. Zero. Yet paid youth would want to humiliate Marwa for his words to the wise.

“The legacy Bindow will ever live to be remembered with, is the crises of monarchy in Maiha and Michika where the legitimate heirs were robbed of their stools, which resulted in court cases.

“Northern zone is expected to be reconstructed, having suffered devastation occasioned by BH insurgency. However, the government presence in Michika and Madagali seemed to be lacking.

In Maiha, a cottage hospital was partially renovated without furnishing, equipping and deploying the services of clinical staff to man the hospital.

“That’s the only legacy left by the son of the soil as governor, yet some people still think that Bindow remains the best governor in the federation. It is rather unfortunate, so sad,” the youth group lamented.