Opinion: Who Is PDP’s Mole In INEC?

Opinion: Who Is PDP’S Mole In INEC? 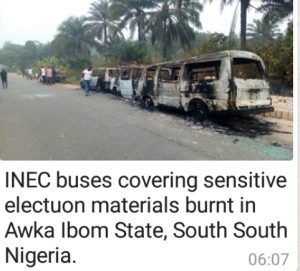 Amina Zakari was head of logistics of INEC. PDP and all manner of corrupt persons and groups mounted a vigorous, hateful campaign calling for her removal from that position. And to avoid (later) accusations of bias and favouritism by INEC in the eventuality of Buhari winning the 2019 presidential election, Professor Mahmood Yakubu removed her from that office and replaced her with Professor Ikechukwu Ibeano as the new head of logistics!

Thereafter, INEC was to postpone the 2019 presidential election because of LOGISTICS that have been compromised!

Who compromised those logistics? Who gave INEC Card Readers to those PDP operatives in Rivers and Abia states that were arrested with over 100 Card Readers? And who gave Abia State PDP the logistic of INEC result sheets for 2019 that were filled already with total victory for the PDP?

So, who is PDP’s mole in INEC?

I think this postponement is beginning to make more sense to me!

Opinion: Why The North Will Not Vote PDP Massively…