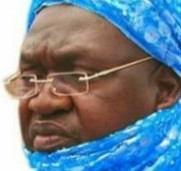 Since it was a confrontation failed Sunday, Friday would be intimidated for violence using the ‘Yan Gora in Jalingo-Maiha,” has been the trending news in Maiha.

If you think it is a mere rumour, the Periscope sees it as a worthy whistleblowing, saving lives and properties from the seeming sponsored Idinated ideation, threatening the peaceful co-existence that should not be treated with levity.

Mark you, the Macbethean overambitious, came in company of the crowds of cowards; the terrorists, intended to unleash violence on Eid day; a day specifically meant for the sacrifice of the specific animals not human lives as a form of worship; symbolising a day the Most Merciful, provided a ram as ransom on the life of Prophet Ishmael (AS) for Prophet Abraham (AS) the tested and trusted to slaughter.

Idi did not realise that the real warriors in Maiha needed no weapon against terrorism and would not wage a war on worship day, meant to share and preach, spreading the words of peace, love, harmony and mutual coexistence.

Announcing their presence, were gunshots from different locations as they passed escorting their kingpin, claiming a kingdom he lacked its mystery in history to have accommodated his storey-lied story.

The real natives, typical of the Madinites, as the Periscope crime scene Sunday would reveal, would not be intimidated.

The impostor, in romance with the contempt of court and insubordinated against an established government he would remain arrogant in the face of ignorance to have recognised, forced himself with the terrorist group as escorts, to the Eid El-Idris, not Eid El-Mubarak the Mahmuds were made to celebrate.

The real natives constituting the viable and verifiable majority, who recognised only the real man Mahmud as the real monarch in Maiha, boycotted the Eid prayer ground near the LEA secretariat, to have been the central Eid ground, with a legitimately established monarchy, led not by the anarchist, in Jalingo-Maiha district.

The real men and women, the real natives- not hypothetical aliens the betrayers- divided themselves into two worshiping groups, observed the Eid prayer at the two factions of the Izala Mosques, where not even the mosquitos, not to talk of the masquerades, could be sent to announce the indecent intrusion of the spoonfed alien, conspiring with the detractors to claim the legitimacy of a throne that belongs to the real natives, simply considered as “Idinated ideation,” beyond the seeming sounding mediaeval

The intention of the sponsored outing, as was alleged, was to have caused a violent rioting, however bloody, enough to declare a state of emergency beyond a mere curfew, which would have eventually, resulted in disqualifying the already disqualified alien impostor and Barr Mahmud, the real native, the court approved, Mubi Emirate Council selected and the subjects celebrated.

“Yarima Mahmud’s profile is so intimidating. He’s too intelligent for this throne. We must throw him out through whatever means violent left.

“Since it’s obvious that our man Idris can’t have it, Mahmud must equally be denied with violence and justice delay,” one of the Idi’s disciples was quoted to have said.

In spite of the intimidation, a life was not lost, Eid El-Adha was celebrated with love in peace, against the Nazi-a-za-tion of Maiha District deploying the savage services of the ‘Yan Gora militia.

“Who authorised the impostor Idi, to terrorise a peaceful community, using ‘Yan Gora and vigilante for police when even the states, not to talk of the local governments, are not constitutionally allowed the use of state or community police?” A social commentator asked.

The whistleblowing youth, with eavesdropping ear to the ground, alleged that Idi the impostor, whom a Yola high court, restrained from parading himself as district head of Jalingo-Maiha, spelt a bloody Friday with ‘Yan Gora militia.

Idi has been notorious in violating court order. In fact, some months previously, in accordance with civil process and sheriff act cap 6 Laws of the federation of Nigeria 2004, Idi was served with forms 48 and 49 as consequences of refusing to obey court orders and committal forms respectfully‎.