Preparations for mischief is ongoing in Maiha. The blinded by ignorance gullible followers, are told to clear thr scene with a view to intimidate a peaceful community who insist that it is an abomination to be led by an impostor; “a butterfly who calls himself a bird,” moralising Ola Rotimi in “The Gods Are Not To Blame.”

The impostor, in his figment of blurred imagination, obnoxiously considered himself a district head of Jalingo-Maiha but only during festive periods and uninvited occasions.

The moment the celebration is over, the impostor picks and packs his parked baggage of garbage and departs, rather unceremoniously as he crept  in, abandoning his gullible followers to rot till another season and/or a session of mischief; instigating anarchy by means of contempt of court and executive orders.

It is now another season for the impostor to showcase his mischievousness; Jalingo-Maiha is bubbling his with his insignificant gullible followers, preparing the stage, intimidating the community, for a disruptive Sallah celebration.

It is learnt from the gullible followers’ narrativisation that the impostor has gone to seek a granted permission from the Mubi Emirate Council, guaranteeing his outing as district on Eid day.

However, this time, the Eid will eventually not be a Mubarak to the impostor and followers.

This time, the impostor is not to eat his cake and have it, as he is summoned before the uncompromising law, on criminal charges.

Can a criminal ever be a district head, especially of Jalingo-maiha known for adopting Makkah and Madinah models put together?

The fetish, the “bori mediumship” negotiators between evil spirits considered as their demigods and the people that honour by patronising them for their luck, ought to have a rethink this time.

The Bible will give a lone choice between either the Mammon or the God.

The Qur’an has definitely defined being both with the Mammon and God at the same time as an act of hypocrisy beyond heresy.

The Upper Area Court Yola, Adamawa state, northeast Nigeria, has on Tuesday, July 28, 2020, summoned Idi Usman Shehu and three others to answer charges of criminal conspiracy and inciting disturbances for anarchy that have resulted hurting so many hearts with others sustaining degrees of injuries in Jalingo-Maiha on a Friday during Jumu’at prayer.

Idi and three others are summoned to appear in person, on Thursday, July, 30, 2020 at 8:30am to answer the criminal charges filed against them by the Commissioner of Police.

His gullible followers think that the impostor has a royal immunity before the law; therefore, his continued romance with the contempt of court and executive orders will not be charged even while he is on bail.

Does it not amount to jumping bail when Idi is restrained by the court and executive orders, from parading himself as district head of Jalingo-Maiha, from going to and participating in any activity in Maiha, yet he arrogantly snubs the orders?

Thursday may determine between either to prison or for a freedom to continue romancing with the contempt of court and executive orders in Jalingo-Maiha.

A courageous king or criminal does not in tears plead for clemency against his tragic flaws before the law; he faces it squarely.

Only the coward cries when his arrogance is subdued. 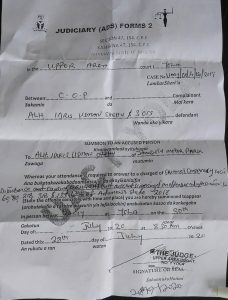