* Tractors, other facilities are vandalised, looted, why just the Indomie? A teenage thing indeed 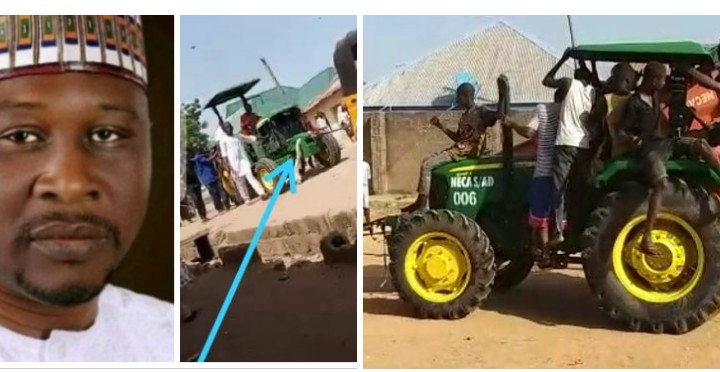 Mike and Musa, not real names, are isolated like minds in the neighborhood who would not be persuaded by pear group or pressured by punitive impunity of parents to join the hoodlums for looting cocooned in #EndSARS protest turned riots leading to anarchy.

“The facilities you’re vandalising and the properties you’re looting in the  name of hunger and anger, do not belong to the governor but the government constituting the governed.

“Governors come and go but the government and the governed remain. Some of us the governed could be governors as well in future we should be planning not destroying,” they would observe.

The over emotionally misled peer group and parents would scornfully tell them to stop moralising and should not ask them for any favour out of the loot they are pleased to refer as booty.

Fast forward: The misled peer group and parents for mischief, blinded by greed; some lost their lives struggling for the public and private properties they referred to as booty, some lost their conscience with others almost the faith the professed, would found themselves, having the devil of thieving in them exorcised by the curfew, call to return the looted properties and House-to-House search orders in addition threat of seizing or pulling down buildings that stored stolen properties the looters called their homes, realised how famous is the shaming of their families the looting made them

Mike and Musa’s parents would want to engage them in returning the properties with apologies to the government through the wards head, claiming the theft to exonerating the parents. The youth with the moral sensibility would but respond politely to their thieving parents that they lacked the strengths to carry their parents’ cross. They would not in anyway cross the line as there is indeed a drawing line to insanity between sinning and the saint.

Mercy and Maryam, also not real name, relating the ordeal, would reveal that  Mike and Musa’s mothers who refused to join the group of looting parents, volunteered to return the properties carted away by their husbands and to apologies before the wards head, recounting rather remorsefully, how their misled husbands felt, however instigated by the threat of confiscation of Certificate of Occupancy or pulling down the buildings they called their homes participated in the looting.

The mothers shielding their children from the looting guilt of their fathers, said “our sons are no thieves, they will therefore have nothing or any reason to be associated with the looted properties.

The fathers would therefore, have to return it by themselves, rather shamefully than to let their wives be exposed to the scorn.

Some of the hoodlums who would not want to be noticed, simply abandoned the items they looted by the roadside.

What is more worrisome, Wonosikou would explain, is how the merchants of misfortune and mischief, constituting the unrepentant hoodlums, would shy away the shame of their guilt lyrically, to ridicule the call to return what they looted.

They sing “Indomie” and dance their shame, scorning the call to return the loot, glorifying the looting that questions the credibility of their sincerity, ignoring what they have vandalised and properties other than the food commodities they have looted.

The ridiculous lyric pleaded with the looters to return the Indomie they considered the looting as booty because the governor has directed that it should be returned. That which resulted to the indefinite curfew, banning markets and vehicular movements, hence reduced citizens to trekking from Jimeta to Yola.

Tukur wondered why the height of the heartlessness!

Public and private properties vandalised, office equipment and even tractors stollen. None of the food commodities looted was returned and the government was only about the facilities carted away. Yet some people are making foolish out of the situation, without being remorseful of their guilt.

Sharif would list the public and private properties vandalised and Kumangar would explain the extent of vandalisation, while governor Fintiri himself would lament his worry that some hoodlums have lost their lives while looting weightier items than their strengths that stretched their lives straight to great beyond.

Counting the loses, arrests were made of the hoodlums more than the prisons and cells could get to accommodate. Thehe number of death casualty is yet to be established. The properties vandalised are listed below enough to determine whether or not the looting should be a subject of ridicule; to demonizing the governor and glorify the hoodlums:

– Custom office
– Road Safety office
– Primary Health Care Development Agency
– NEMA office along Airport road
– Covid-19 Isolation Centre at Kofare
– North-East Commodity Association (NECAS) office, Kofare; Tractors among other items carted away
– A warehouse at Demsawo
– Warehouses along Nyako Quarters
– Dr. ABDULLAHI Dauda Belel’s workshop, the hoodlums would have avail themselves for the skills acquisition training instead of looking
– All warehouses – public or private – after Roundabout maidoki that is not guarded by soldiers or close to Air Force.
– Warehouse behind Zenith Bank, Jimeta Market
– Warehouse along Bakin Kogi
– Warehouse close to Mayanka

Places destroyed and looted in Yola ancient City include the following:

Already some of the victims have claimed losing hundreds of millions of naira to the hoodlums calling on the government to come to their aide or risk going bankrupt.

However, some of the claims are suspected of over exaggerations. This takes another report.

What have these institutions to do with their so-called protests against hunger reduced to riots for anarchy? The Periscope would ask.

OPINION: Political Perspective Of The Fintiri/Husseini Gambo I