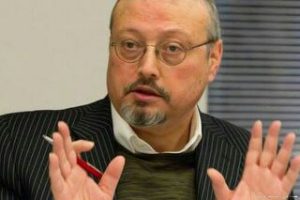 Jamal Khashoggi was one of Saudi Arabia’s most prominent journalists. He had been living in self-imposed exile in Virginia after leaving Saudi Arabia last year. Then, after entering the Saudi consulate in Istanbul on Oct. 2, he disappeared. Turkish officials said he was killed inside. After repeatedly denying it, the Saudi government acknowledged that Khashoggi died there. Saudi officials, who detained 18 people in the case, say he was killed after “discussions” turned physical, an account European officials and some U.S. lawmakers cast doubt on.

1. Why was Khashoggi so prominent?

Khashoggi, 59, was a leading critic of Saudi Arabia’s current leadership, sharing his views via platforms including opinion columns in the Washington Post that began a year ago and were translated into Arabic. His journalism career included stints in Afghanistan, where he met and followed the rise of al-Qaeda chief Osama bin Laden in the 1980s. He was deputy editor-in-chief of the Saudi newspaper Arab News at the time of the Sept. 11, 2001, attacks on the U.S., which made him a valuable source for foreign journalists seeking to understand what drove some Muslims into such actions. In the 2000s, he was twice fired from his post as editor-in-chief of the Saudi Al-Watan daily newspaper, which under his leadership ran stories, editorials and cartoons critical of extremists and the way in which the country enforced its religious values. (Saudi newspapers are privately owned but government-guided, and the government approves and can fire top leadership).

2. Why was he so well-known outside Saudi Arabia?

In part because, in between his Al-Watan stints, he was an adviser to the Saudi ambassador to London, Prince Turki Al-Faisal, a former long-serving intelligence chief. Then, in 2005, when the prince was appointed the Saudi envoy to the U.S., Khashoggi joined him as a media aide. Most recently Khashoggi worked as a columnist and commentator before leaving the kingdom for exile in the U.S. in June 2017.

He told friends and reporters that the space for freedom of speech under Crown Prince Mohammed bin Salman was shrinking and he feared for his safety. In an appearance on Al Jazeera TV’s “Upfront” that aired in March, he said he’d left the kingdom “because I don’t want to be arrested.” On the worsening environment for journalists since Prince Mohammed took over, he said, “I got fired from my job twice because I was pushing for reform in Saudi Arabia. It wasn’t that easy but people were not being put in jails. There was a breathing space.”

Khashoggi didn’t see himself as a dissident but as a critic worried about the direction his country was going under its 33-year-old crown prince. In his first Washington Post column on Sept. 18, 2017, he wrote about his decision to leave Saudi Arabia: “I have left my home, my family and my job, and I am raising my voice. To do otherwise would betray those who languish in prison. I can speak when so many cannot. I want you to know that Saudi Arabia has not always been as it is now. We Saudis deserve better.”

In February, Khashoggi wrote that Prince Mohammed maybe “should learn from the British royal house that has earned true stature, respect and success by trying a little humility himself. If MBS can listen to his critics and acknowledge that they, too, love their country, he can actually enhance his power.” In one of his last columns, he urged Prince Mohammed to end the war he started on Yemen more than three and a half years ago: “The longer this cruel war lasts in Yemen, the more permanent the damage will be. The people of Yemen will be busy fighting poverty, cholera and water scarcity and rebuilding their country. The crown prince must bring an end to the violence and restore the dignity of the birthplace of Islam.”

5. Why would he enter a Saudi consulate in the first place?

To finalize paperwork for his wedding to Hatice Cengiz, a 36-year-old Turkish doctorate student. He had recently bought an apartment in Istanbul so the couple, once married, could divide their time between Turkey and the U.S.

6. What has the Saudi government said about Khashoggi?

Saudi authorities refrained from saying anything critical about Khashoggi after his disappearance. Prince Mohammed said in a Bloomberg interview in Riyadh Oct. 3 that Khashoggi is “a Saudi citizen and we are very keen to know what happened to him.” His brother, Prince Khalid bin Salman, who’s the kingdom’s ambassador to Washington, called Khashoggi a “friend” and praised him for dedicating “a great portion of his life to serve his country.”

In Turkey, they’re known as the Kasikci family. Their most famous member until now was Adnan Khashoggi, the billionaire arms dealer whose biography is called “The Richest Man in the World,” and who in the 1980s sold his yacht, the Nabila, to Donald Trump. Adnan Khashoggi’s father was Turkish, a doctor who married a Saudi woman and became court physician to King Abdulaziz, the founder of modern Saudi Arabia. That marked the family’s rise to prominence in Saudi Arabia. However, they’ve kept their ties to Turkey. Another member of the family, Hasan Khashoggi, made the news in Turkey in 2017 when he survived a terrorist attack in Istanbul, in which a gunman massacred 39 people.

— With assistance from Benjamin Harvey.