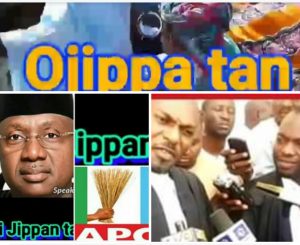 * Accelerated hearing is standing, in the sense that anywhere we go, the case must be heard before the election – Abor

The political parties fit for the contest, have showcased their aspirants for Adamawa gubernatorial election. Even though there is a pending court case with the APC gubernatorial candidate.

The campaign rallies have generated argumentation and debate among the electorates, the violence that could follow, instigated by the defeated bereft of critical thinking for issue based, constructive defence, is what the United Nations-POLAC, in its peace mission, preaches against.

However, the contest for now, is between governor Bindow who’s canvassing for continuity and the opposition aspirants who jointly rather impliedly, interpreted Bindow led government as a disappointment occasioned by social welfare sabotage and economic under development; that “denying by delaying payments of salaries to primary healthcare workers and local government staff in a seeming salary state, amounts to killing grassroots business,” They would argue.

There’s also the allegation of deception defined as unpalatable legacy along with the issue of certificate forgery, which is considered to be another angle of fantastic form of fanatic corruption in education and administration, technically speaking.

The composite of all, gives reason to amplify Admiral Nyako’s call to “O jippa tan!” echoed from Maiha during his consultation tour.

Maiha is still in mourning over the monarchy in one of its districts, which the court of law has passed a ruling in favour of the subjects and that which is yet, approved by the governor as the competent and incorruptible jury has given as court order.

“O jippa tan,” is in Fulfulde language. It is crudely interpreted to mean “he must go” or “he has had it enough.”

Whichever way; either to be disqualified by court ruling against certificate forgery or be voted against by the electorates. The call to o jippa tan, will mean, is answered.

Nyako sues for peace and violence free means of registering grievances on maladministration through ballot paper using PVC. He will not want to have continuity in Bindow, never will he forget the humiliation by the Fintiri led legislators, occasioned by illegal impeachment to establish illegal legislative-executive that would later, by the judiciary, be revoked. Could he have defective memory against reality to opt for PDP’s Fintiri when he was instrumental in the digging of PDP’s grave intended not for resurrection after three days?

“Fintiri was the first, to betray Nyako before Bindow had his take on the betrayal,” a political analyst would say.

Nyako, I’m told, by who? Why bother asking brother? He’s my father after all. So, I’m told, will not consider SDP’s Emmanuel Bello as window to bringing down Bindow to his knees, recasting the prodigal child, hitherto misguided by arrogance for deception. He has not campaigned for Sen. Abdulaziz his son either as much as no one could say that he has decamped from the party he brought and nurtured to fruition in Adamawa state; the APC.

Bindow is alleged to have failed the elders, the aged, the retired, the workers, the unemployed, the women, the youth, disrespects monarchy and distorts, by deception, civil system, mortgages the state to to banckruptcy with uncalled for debts (loans) never experienced before… was the summary of what informed the Nyako’s “o jippa tan” slogan that goes viral in the state.

Admiral’s consultation tour round the entire local government areas of the state was defined as a deadly blow to Bindow, who was reported to have said that he would not engage himself in any campaign rally, he would only thank the people of Adamawa state for the opportunity given to him to serve as a governor not because he was better than anybody but because it was the will of God.

A school of thought in the debate however, argues that unless the law disqualifies Bindow, in spite of the spelt out weaknesses as stench, he has some areas of strength to fill in, the filth has not infiltrated.

It is no strange, public fortunes must have been exhausted but there are some road projects, some promotions, some appointments, some employments an improved revenue generation but don’t ask me about the sharing formula.

Though the exploited are disappointed for the unfulfilled promises, some of them are however, more disappointed that capable hands have volunteered to salvage their situation not to be drifted on the raft to an undefined destination by the wave. To show gratitude to those heroes who are sympathetic to their devastating condition, the electorates in question, will rather opt for sympathy vote in favour of Bindow, in addition to the Buhari factor the governors with the ruling party will enjoy.

The electorates in Adamawa are, for the most part, keeping secret the governor of their choice. They could be waiting for court ruling relating to case of certificate forgery; whether or not a government will ever accuse them of corruption for diverting funds or any form of diversion of public’s to private use, punish students for cheating in classroom and or certificate buying.

Recall that a Human Rights group called Global Integrity Crusader Network has filed a case before the court of law in Abuja, challenging the nomination of Bindow Jibrilla as gubernatorial candidate of APC in Adamawa state for presenting a forged secondary school certificate

The case was then transferred to Federal High Court Yola for accelerated hearing and ruling.

The high court judge in Yola, Abdulaziz his name was, did not pass the judgement. He has instead, decided to return the case to the Chief Justice of the Federal High Court to be reassigned to another judge due to what he considered as the sensitivity of the case and clash of interests.

Meanwhile, the lawyers to governor Bindow as the Periscope Global Investigate earlier reported, argued that their concern was not to contest on whether or not their client presented a forged certificate. Their business was to contest against the locus standi of the plaintiff; the Human Rights group to institute the case, challenging their client, considering the fact that the plaintiff was not an indigene of Adamawa State and was not a contestant in the primaries.

However, the plaintiff, represented by Barr. Abor, while responding, explained to newsmen the legitimacy of the suit.

“I want to say that the person who filed the case is artificial. In law, artificial person is as good as natural person. He’s called Global Integrity Crusader Network. He’s registered with Corporate Affairs Commission and their certificate is attached.

“There’s constitution, which gives them power to advocate for integrity, justice and equity in public offices, to fight corruption, injustice and economic sabotage. Everything is attached to the court.

“There’s no way you can say that they have no business coming to court. How do you advocate for integrity if you see something wrong somewhere you don’t say it?

“What they have done is that they saw something wrong. Somebody has submitted a forged certificate to INEC and that is why they raised the alarm. That is why they come to court.

“So, they have all the locus standi that any indigene of Adamawa would have had. There are members in Adamawa and across the country…

“It’s just like other organisations, like law that goes to court when there’s something going wrong. It doesn’t necessarily mean, it must affect me as a person. It means that the organisation can correct.

“Take example of Amnesty International among others, they have gone to court for reasons not because their brother was beaten up. They could have discovered that there’s injustice somewhere and the court has severally granted them audience. And that is why we’re being granted audience.

“At the end of the day, the court will decide on the preliminary objection filed by them, saying we don’t have locus standi. we’ve replied.

“If the court said we don’t have locus standi, no problem but the court will not rule that way because we know, we’ve read all the law. We have the locus standi to pursue this case in the manner that we’ve done,” Abor said.

Giving the background of the case, Barr. Abor said that it’s incumbent on Bindow “to prove by way of certificate, testimonial or the school register, where his name appeared that he finished from that school in Miangu.

“For now, we’ve not seen anything on record. What we have and we obtained from INEC is that the WAEC certificate bearing his name, belongs to another person, from… We wrote to WAEC and WAEC certified that it did not emanate from them.

“If he’s denying that it was not his result, then he should allege that we forged it. If he didn’t forge it, then we forged it.

“Nobody has alleged, no police has caught us for any forgery of that very certificate,” Abor said.

Now that the case was returned back to the Chief Justice of the Federal High Court to be reassigned to another judge, would there be ruling before election?

Barr. Abor argued that accelerated hearing would not be abhorred or aborted. It was already adopted.

“Accelerated hearing is standing, in the sense that anywhere we go, the case must be heard before the election. So that we know whether he’s (Bindow) the one to contest the election or his name will be replaced with another person or the ticket will be given to another party entirely,” Abor said.

Perhaps, it is what Admiral is waiting for, before making public the candidate and the party of his choice for governorship in Adamawa state.

It is however, what so many electorates across the state, the Periscope Global Investigate interviewed, are waiting for.