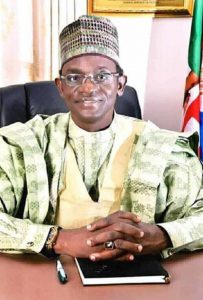 The ruling all progressive Congress (APC) National secretary and Yobe gubernatorial flag bearer, Hon. Mai Mala Buni is a product of honesty, integrity, generosity and morality an excellency in peace, patience and perseverance. A gentleman with uncompromising principle, unbroken promise and unmortgaged. fairness and justice

Buni’s agenda of continuity and consolidation, demeans the mean and demon minded. It makes meaning for men and women of Yobe.

Buni the APC standard bearer, holds tenaciously the spirit of transformation agenda in theory and practice as championed by his mentor governor Gaidam, which translates the food governance in Gaidam’s led administration and policy thrusts from 2009 to this day. and beyond. Buni’s dynamism is synonymous to Tone, 2019.

Hon. Mai Mala Buni is one man who believes that leadership as an end in itself, is merely the opportunity to serve; bearing in mind that power is a God given resource with which human kind are to be coordinated and as a solution to to anarchy. And that Good leadership is meant to change lives for the better.

Buni has proven to be astute manager of people since his inception as the ruling All progressive Congress (APC) National Secretary. A loyalist to the core and a diehard apologist of the party.

Buni has stood the taste of time and proven to be a leader of high ethics against being ethnocentric. He has, as APC leadership and Yobe people recommend, exhibited uncommon wisdom, remarkable vision, exemplary and leadership worthy of emulation.

In a country like Nigeria, people believed and perceived that only the rich with deepest pockets buys the support of the masses, but that of Buni is the other way round, he has being a grassroot mobilizer and astute manager of people right before now.

Buni’s overwhelming supports is as his political background and wide political network that speaks volumes.

Buni is calling on all and sundry in APC family across the country to hurry coming onboard the moving train heading to the next level of the progressive with the assurance to ensure constant engagement with the entire members with a view to the effect that no one is left alone, everyone is carried along in the family- like atmosphere.

There is no denying the fact that Hon. Mai Mala Buni has rejuvenated the confidence of Yobeans and is ever ready to fit into Gaidam’s large shoes for continuity.

There is no doubt that Buni has in recent times, achieved quite a significant milestone in bequeathing the ruling all progressive Congress (APC) to the high pedestal of success.

Yes, together we can make it to the next level..