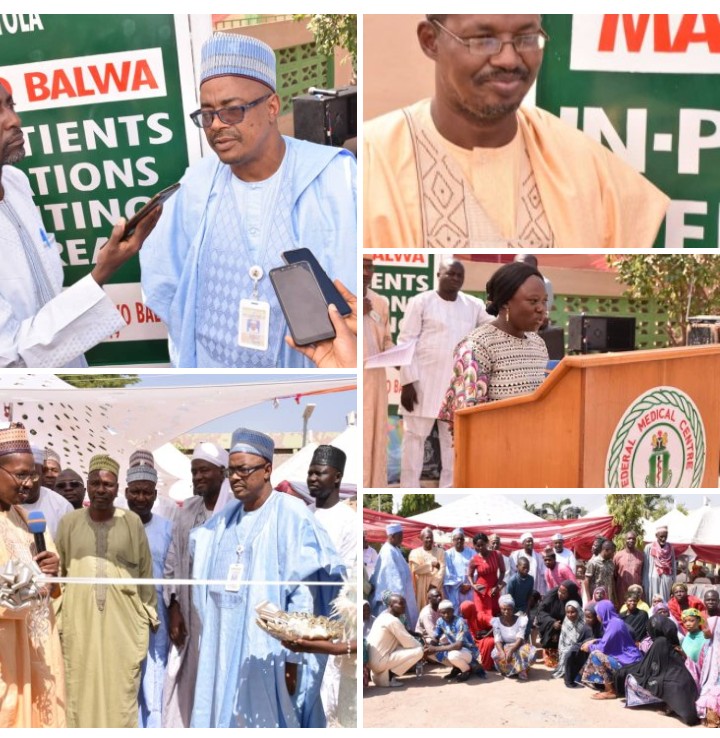 A businessman and philanthropist, Alh. Mohammed Aminu Umaru Mayo-Balwa in rendering selfless, community service to humanity as a social responsibility, built a Patient Relatives (PR) Waiting Area, which was handed over to the Management of Federal Medical Centre FMC Yola.

Speaking at the commissioning ceremony Thursday, Alh. Mohammed Aminu Umaru Mayo-Balwa ably represented by Dr. Aminu Chiroma the former provost Federal College of Education FCE Yola and the current Dean Faculty of Technology Education, Modibbo Adama University of Technology MAUTech Yola, having commended the entire staff for the effective and efficient healthcare service delivery in a tidy environment, expressed his appreciation to the management of the Centre for the opportunity given to him to contribute his quota in the service to humanity.

“Today is a memorable day in FMC Yola; commissioning of one of the purposeful projects initiated by the Medical Director Federal Medical Centre, Yola, Prof Auwal Mohammed Abubakar. The MD put up the concept of patient relatives waiting area and I found it worthy for intervention,” Aminu said.

Aminu expressed his appreciation to the Hospital Management for giving him the opportunity to contribute his quota, where he promised to do more, now that he has realised that there was a window for such social responsibility.

Dr. Aminu Chiroma said that the donated building was a demonstration of Alh. Mohammed Aminu Umaru Mayo-Balwa’s
humanitarian spirit, noting that government alone could not meet the unlimited needs of her citizenry with the growing scarce resources; humanitarian, community services as a social responsibility to be able to cement some gaps have therefore become necessary.

Chiroma has called on the well-meaning individuals to also key in to such philanthropic intervention.

Earlier in his welcome address, Prof Auwal the MD FMC Yola thanked Alh Aminu for providing the edifice meant for patient relatives within the Centre, adding that it would go a long way in decongesting the wards and corridors in the Hospital.

Patient relatives, Auwal said, were usually found loitering around the hospital with no place to stay. They have been pathetically in the open space, subjected to harsh weather. Alh Aminu’s philanthropic intervention- he dedicated the name to Mayo-Balwa, having hailed from the local government area- would enable the patient relatives to have a place not only to sleep but also for laundry and cooking.

Auwal said that a lot of people were approached in the idea. Aminu was the second person to build the patient relatives waiting area. The first response to the prayer was commissioned in 2018.

Auwal revealed that Alh. Aminu Umaru Mayo Balwa was in the hospital to visit his patient. He was captivated by the patient waiting area opposite the Accidents and Emergency Complex he was told was a philanthropic intervention. He indicated interest in providing one for the Hospital.

“The newly constructed patient relatives waiting area consists of two large rooms, with 6 toilets, a laundry area and a kitchen to cater for the needs of female patient relatives,” Auwal explained.

Auwal expressed his appreciation to the donor on behalf of the Management of the hospital, assuring that the facility be properly managed.

The representatives of the patient relatives also expressed their appreciations to the donor and the Hospital for initiating the project and prayed for the blessings of Allah SWT upon them.

Highlights of the event include the presentation of an award plague and appreciation letter by the chairman of the occasion Alh. Abdullahi Suleiman on behalf of the board members and management of the hospital to Alh. Aminu Umar represented by Dr. Aminu Chiroma.

Alh. Abdullahi Suleiman is the chairman Hospital Paupers Fund, Yola. Presenting the appreciation letter and award, Suleiman explained that Prof Auwal the medical director has a lot of initiatives for the success of the health facility, efficiency and effectiveness in addition to that which catered for the needs of the indigent patients that were on admission in the hospital.

One of such interventions Suleiman said, was the establishment of hospital paupers that has generated over N25m and has catered for hundreds of indigent patients who were qualified to benefit from the fund scheme.