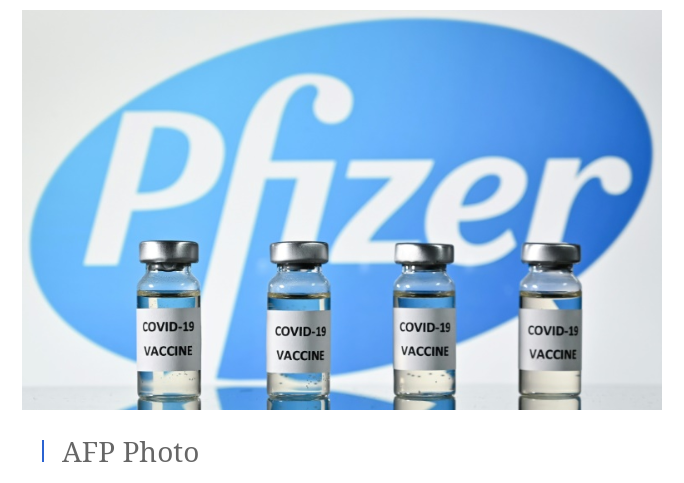 * Distribution could start within ‘hours’ of US authorisation, drug firms say

* Thevaccine has been developed with breathtaking speed — just 10 months after the genetic code of the novel coronavirus was first sequenced.

The announcement had been expected for several days, after the companies said that a completed study of trials of the product showed it was 95% effective in protecting people from infection. The announcement also confirms what BioNTech’s CEO told AFP on Thursday.

“Filing in the US represents a critical milestone in our journey to deliver a COVID-19 vaccine to the world and we now have a more complete picture of both the efficacy and safety profile of our vaccine, giving us confidence in its potential,” Pfizer CEO Albert Bourla said.

The vaccine has been under evaluation for weeks in the European Union, Australia, Canada, Japan and the United Kingdom, the companies said.

“The companies will be ready to distribute the vaccine candidate within hours after authorisation,” their statement said.

The Food and Drug Administration has not said how long it will take to study the vaccine data, but the government expects to give the green light for the vaccine in the first two weeks of December.

The European Union could also move quickly on the Pfizer-BioNTech vaccine, perhaps as soon as the second half of December, according to European Commission president Ursula von der Leyen.

Hot on the heels of these companies is a vaccine developed by another biotech firm, Moderna, which says its product is also about 95% effective.

The speed with which these vaccines have been developed as the pandemic wreaks havoc around the world has no precedent. Over the past decade, the vaccines authorised in the US have taken an average of eight years to develop.

The US government says it plans to vaccinate more than 20 million people in December, and then another 25-30 million per month.

Adding to the encouraging 95% efficiency data for the Pfizer product is the fact that efficacy was found to be consistent across all age-groups — a primary concern for a disease that hits the elderly the hardest — as well as genders and ethnicities.

Pfizer and BioNTech say 170 people fell sick in an ongoing clinical trial of almost 44,000 people — 162 of whom were in a placebo group and eight of whom received the two-dose medicine.

Out of the 170 patients who became sick, 10 developed severe Covid-19 — nine in the placebo group and one in the vaccine group.

The new data showed the vaccine was generally well tolerated, with most side-effects short-lived and either mild or moderate.

About four percent experienced severe fatigue and two percent got severe headaches after their second dose. Older patients had fewer and milder side-effects.

Both vaccines use mRNA (messenger ribonucleic acid) technology to deliver genetic material to the body that makes human cells create a protein from the virus. This trains the immune system to be ready to attack if it encounters Sars-CoV-2.

There are important differences between the two vaccines. Pfizer’s needs to be stored at -70 degrees Celsius while Moderna’s only needs -20C, more akin to a regular freezer.

On the other hand, the Pfizer-BioNTech doses are much smaller — 30 microgrammes to Moderna-NIH’s 100 microgrammes — probably lowering production costs per dose.