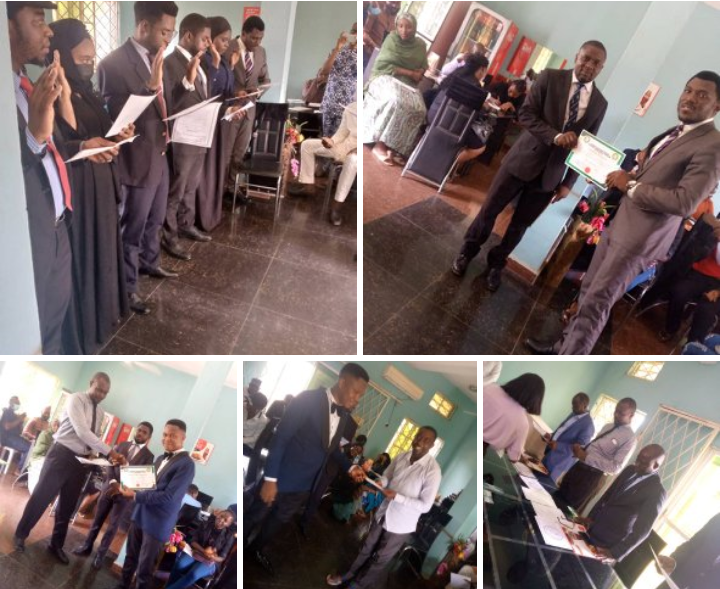 Nigerian Bar Association (NBA) Young Lawyers Forum (YLF) Yola Branch has inuagrated her new council members to run the affairs of the forum for the next two years.

“Chief Nzadon delivered the keynote speech where he talked on young Lawyers’ plight in Nigeria, where he stressed the need for young lawyers to stand tall and do the needful so that they would eventually succeed.

“Also, the outgoing Chairman, Mr. Promise Ajumebor while delivering his speech thanked all members of the bar and bench for their support throughout his administration, he also urged the new Chairman and his council members to continue from where he stopped.

“The outgoing council used the opportunity to share palliatives to her members following the total closure of the courts due to JUSUN strike.

“The palliatives, Mr. Promise Ajumebor said, was nothing less than what the Nigerian Bar Association, National Body shared last year to young lawyers during the Covid-19 lockdown.

“The Yola YLF is the first forum to do that throughout the Nation. It’s indeed a great pace that other branches should follow. The outgoing council also presented a cash support to two of her members who got married recently.

“In his remarks, the newly inuagrated Chairman, Mr. Solomon J. Garba thanked each and everyone for supporting him to emerge as the chairman. He promise to continue the good work that Mr. Promise Ajumebor’s led adminstration already started.

“The NBA Yola Chairman Mr. J. I Jimeta thanked each and everyone that witness the inuagration. He also promise to work together with the new council members,

“Jimeta has appreciated the palliatives shared by the forum where he assured that the branch was also planning on how to support young lawyers during the hard period, stressing that the branch is really disturbed by the JUSUN industrial action. He pray that the strike action would come to an end soon as both parties should do the needful.

“Other council members inaugurated are listed below: